In the Supreme Court this week 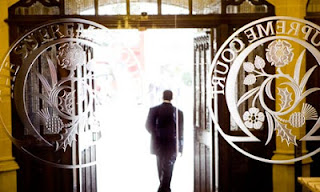 The Supreme Court handed down judgment in Secretary of State for Foreign and Commonwealth Affairs v Yunus Rahmatullah [2012] UKSC 48.

The Court of Appeal (Civil Division) had issued a writ of habeas corpus with a view to securing Mr Rahmatullah's release.  He remains held by the USA at Bagram, Afghanistan.  Later, the Court of Appeal accepted that the Foreign Secretary had made an adequate "return" to the writ.

The Supreme Court unanimously dismissed the appeal of the Secretary of State and by a majority of 5-2 (Lady Hale and Lord Carnwath dissenting) dismissed the cross appeal of Mr Rahmatullah.  See the judgment and the press summary.

Reference by the Supreme Court to the Court of Justice of the EU:

In Jessy Saint-Prix v Secretary of State for Work and Pensions, the Supreme Court has made a reference to the Court of Justice of the European Union.  The issue in the case is whether Jessy Saint-Prix retained her right to reside in the United Kingdom as a ‘worker’ pursuant to Article 7 of Directive 2004/38/EC (‘the Directive’) during the period when she temporarily ceased to be employed by reason of the late stages of her pregnancy and early aftermath of childbirth.

The Supreme Court is obliged to refer questions of EU law to the Court of Justice for the European Union (‘the CJEU’) if the application of the Directive in the circumstances of this case is not clear.  Accordingly, the Supreme Court has referred certain questions to the CJEU.  The key purpose of the reference procedure is to ensure uniformity of the law across the EU.  See Press summary.

The reference procedure is now set out in Article 267 of the Treaty on the Functioning of the EU (TFEU) and is explained here.

For another view of this case see Head of Legal Blog - Supreme Court judgment: Prix v Work and Pensions Secretary.

The Court of Justice of the European Union shall have jurisdiction to give preliminary rulings concerning:

(a) the interpretation of the Treaties;

(b) the validity and interpretation of acts of the institutions, bodies, offices or agencies of the Union;

Where any such question is raised in a case pending before a court or tribunal of a Member State against whose decisions there is no judicial remedy under national law, that court or tribunal shall bring the matter before the Court.

If such a question is raised in a case pending before a court or tribunal of a Member State with regard to a person in custody, the Court of Justice of the European Union shall act with the minimum of delay.