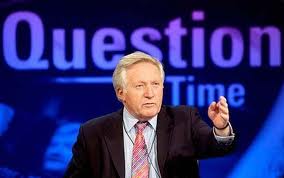 On BBC Question Time 22nd November 2012 an audience member asked a question - "Should we simply put Abu Qatada (AQ) on a plane to Jordan?" - see BBC QT at time 8mins 25 secs.  The responses to this question raise some serious concerns about the stance of British politicians regarding the rule of law and the future protection of human rights.

The clear inference in the question is that, irrespective of the decision of the Special Immigration Appeals Commission (SIAC) on 12th November 2012, AQ should simply be deported anyway.   See also Law and Lawyers - Mohammed Othman (Abu Qatada).   In fairness, I am not sure that the man asking the question realised that it was a British court which, in the end, decided that the assurances provided by Jordan were still insufficient to ensure that AQ would receive a fair trial in Jordan.  The key point was that Jordanian criminal law did not necessarily prevent evidence being used by the prosecution at AQ's trial given that it might have been obtained by torture some years ago.

Although Grayling and Harman both defended the right of British judges to make independent decisions, they made it perfectly clear that they disliked the outcome.  Grayling confirmed that the government will appeal SIAC's decision.  Appeals are available to the Court of Appeal but on points of law only.  Questions of foreign law are regarded, by English courts, as questions of fact.  Grayling also said that he is seeking a new human rights framework since, in his view, the present framework has moved a long way from what was intended originally.  He hoped that such a new framework could be put to the British people at the next election.  It is true that things have changed since the 1950s when the Convention was first drawn up.  Above all, the Convention has come to be viewed as a living document to be interpreted in the light of prevailing circumstances.  If the convention were not viewed in this way, many beneficial and civilising reforms might not have come about.  (See Additional materials below).

Harman wished to see a return to some system of detention so that individuals such as AQ could be detained even if they cannot be either tried here or deported.  Such as system existed under Part IV of the Anti-Terrorism Crime and Security Act 2001 but the House of Lords ruled in A and others v Home Secretary [2004] UKHL 56 that section 23 of the Act was incompatible with Articles 5 and 14 of the Convention since it was disproportionate and permitted detention of suspected international terrorists in a way which discriminated on ground of nationality of immigration status.  Subsequently, the law was reformed by the Prevention of Terrorism Act 2005.

Panel member Moray MacLennan expressed unease at the fact that AQ has never been charged with any offence in England.  No clear reason for this was forthcoming though the answer may lie in whether, at the relevant time, any activities of AQ were caught by English terrorism law - a net which has widened considerably over the years.  Of course, the British public are expected to accept that AQ is dangerous because the government says so and SIAC agrees with them.  We, the public, are not allowed to know the full evidence against him.  Such is the nature of closed proceedings which, under the Justice and Security Bill, the government wish to see extended to civil cases when "national security" is raised.

A fuller discussion of the Question Time debate may be read at UK Constitutional Law Group blog where Professor Gavin Phillipson (University of Durham) looks at Debating the Abu Qatada affair.  Professor Phillipson begins by saying - "I found the debate illuminating and alarming in equal measure; it made me reflect seriously on how precarious Britain’s interwoven system of international and domestic protection for human rights may actually be these days."  The full article is an essential read.

A glance at SIAC:

SIAC has been criticised because of its secrecy but judgments are published (see Bailii) albeit usually anonymised.  There are also "closed" judgments which are not published.   In the latest Abu Qatada case there are published reasons and a closed judgment.

The Lord Chancellor (Mr Grayling) has considerable powers in relation to SIAC.  He determines the number of SIAC members and they hold and vacate office in accordance with the terms of their appointment and are, on ceasing to hold office, eligible for re-appointment.  A member of the Commission may resign his office at any time by notice in writing to the Lord Chancellor.  Hearings are usually chaired by a High Court Judge who sits with two other panel members.

A Ministry of Justice advertisement for SIAC members in 2010 stated - "If you have experience at a senior level handling Top Secret material, perhaps in government service or in the field of Security, your ability to scrutinise sensitive material will help ensure SIAC decisions are balanced, informed and fair."

There are therefore some non-legally qualified members.  They are appointed by the Lord Chancellor/Secretary of State for Justice on terms which he sets.  Since the lay members are there as part of the decision-making body as opposed to being merely advisory, it may be that they do not truly have the judicial independence one might expect.

Interestingly, it seems that membership of SIAC has become something of a niche for retired diplomats etc.  Sir Brian Barder KCMG  - himself a former diplomat and member of SIAC - resigned from SIAC in January 2004.  His article of 18th March 2004 remains of interest.  In this, Barder comments about the membership of SIAC and, in particular, the role of the lay members.  He wrote:

"It is fair to ask, however, whether intelligence experts ought to be full members of the commission, rather than act as advisers to a panel of three fully-fledged judges. Former senior civil servants and diplomats have necessarily been closely identified for most of their working lives with the Whitehall and Westminster establishment, and may be more reluctant than judges to question the wisdom of the intelligence community, ministers and their officials."

Barder resigned from SIAC when he formed the opinion that the decisions of the Court of Appeal and House of Lords in Rehman [2001] UKHL 47 had effectively buckled SIAC into a legal straitjacket making it unable to act "as an effective champion against error or abuse by the executive."

the following will be of interest to legal professionals and to students keen to obtain a good degree ...

On the "living instrument" view of the European Convention, see The ECHR as a Living Instrument: Its meaning and legitimacy - George Letsas (University College London) and also the speech by Lady Hale in 2011 - Beanstalk of Living Instrument?  How tall can the ECHR grow?

Then there is The European Court of Human Rights in Action - Luzius Wildhaber and, in 2011, What are the limits to the evolutive interpretation of the Convention? was published by the court.

Luzius Wildhaber was President of the European Court of Human Rights.