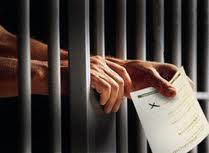 By today, the government was required to bring forward legislative proposals relating to prisoner voting.  A DRAFT Bill has been issued - Voting Eligibility (Prisoners) Draft Bill

Option 1: ban for prisoners sentenced to 4 years or more

Option 2: ban for prisoners sentenced to more than 6 months

Option 3: ban for all prisoners - (the draft bill states - "re-enacts the current general ban on prisoner voting, but with a few minor changes")

Quite clearly, Option 3 cannot be compliant with the obligation placed on the UK by decisions of the European Court of Human Rights since the court decided that it was the blanket ban which was non-compliant with Protocol 1 to the Convention.

The executive clearly does not wish to alter the present law and this draft bill may be viewed as a cynical attempt at being able to claim that the government is respecting the convention whilst simultaneously ducking the issue.  The draft bill will undergo "pre-legislative scrutiny" thereby delaying reform for as long a period as possible.  For how long?  Who knows - perhaps beyond the present Parliament.

It seems somewhat odd that when the Ministry of Justice is talking seriously about a revolution in rehabilitation and restorative justice it is refusing to properly get to grips with the prisoner voting issue.  Many argue that deprivation of voting rights works against rehabilitation.

An important point should be borne in mind.  The European Court judgment in Greens and MT v UK also requires the UK to actually alter the law within a period to be determined by the Council of Europe's Committee of Ministers.