The Grenfell Tower Fire Inquiry issued its Phase 1 report in October 2019 and confirmed what was perhaps obvious - "The principal reason why the flames spread so rapidly up, down and around the building was the presence of the aluminium composite material (ACM) rainscreen panels with polyethylene cores, which acted as a source of fuel." - (see Executive Summary of Phase 1 report at para 2.13).

Further, at para 33.6, the Executive summary noted that - "It is clear that the use of combustible materials in the external wall of Grenfell Tower, principally

in the form of the ACM rainscreen cladding, but also in the form of combustible insulation, was the reason why the fire spread so quickly to the whole of the building. Surveys undertaken since the fire have established that external wall materials similar to those used on Grenfell Tower have been used on over 400 other high-rise residential buildings around the country ...."

The Grenfell Fire brought the extensively used cladding to the attention of attention of the public and politicians but, almost four years after the fire, the issue of payment for replacing ACM is not fully resolved.

Many readers will no doubt think that the costs of replacing unsafe ACM would have to be borne by  the landlord (or freeholder) but, in law, exactly how costs are divided between a landlord and tenant will usually depend on the terms of the lease under which the tenant occupies the leased premises.

A number of cases came before the First-tier Tribunal (Property Chamber).

One case involved property in Croydon known as Citiscape where the tribunal held that a "service charge" was payable by the tenants for the estimated recladding costs - see the Judgment. One of the Citiscape residents - Mr Anuj Vats - wrote of his experience HERE. It is well-worth reading. In the event, much to the relief of the tenants, Barratts Developmentsdecided to take on the costs - The Times 7 July 2020.

Another case involved property in Greater Manchester known as Cypress Place and Vallea Court. The tribunal held that the costs incurred in replacement of the cladding were recoverable as service charges payable by the tenants. See the Judgment.  A fund was created by the freeholder - Pembertons - to cover the costs - Confidentials Manchester 1 March 2019.

Naturally enough, tenants (or their representatives) turned to government to seek help. The Fire Safety Bill was before Parliament and attempts were made to amend the Bill to address the problem. The attempts were unsuccessful - see Inside Housing.

The Bill (now the 2021 Act) clarifies that for any building containing two or more sets of domestic premises the Regulatory Reform (Fire Safety) Order 2005 applies to the building’s structure and external walls and any common parts, including the front doors of residential areas - Research Briefing on the Fire Safety Bill

A draft Building Safety Bill has been the subject of pre-legislative scrutiny by the Housing, Communities and Local Government Committee which reported in November 2020 - see the Report. 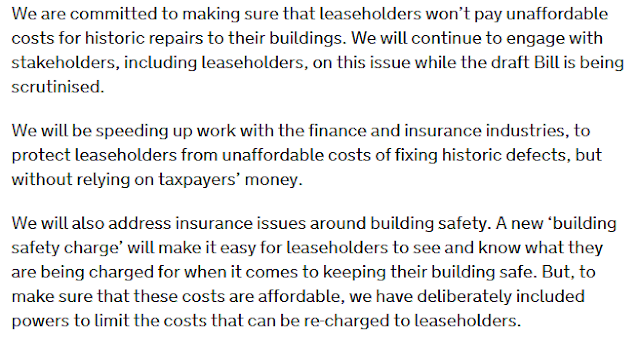 The government will fully fund replacement of unsafe cladding in residential buildings of over 18 metres (6 storeys). For lower rise buildings there will be long-term, low interest, government-backed financing arrangement under which no leaseholder will have to pay more than £50 per month.

Why the distinction at 18 metres?  The government argues that lower-rise buildings have a lower safety risk. Home Office analysis of fire and rescue service statistics showing buildings between 18 and 30 metres are four times as likely to suffer a fire with fatalities or serious casualties than apartment buildings in general.

Of course, it is arguable that building height ought not to be the only measure of risk. For example, a low rise building housing elderly / inform people would present particular risks.

In November 2018, the government made Regulations to ban the use of combustible materials on the external walls of new buildings ober 18 metres containing flats, as well as new hospitals, residential care premises, dormitories in boarding schools and student accommodation over 18 metres.

The legislation may be found HERE.

The Guardian 6 May 2021 - Grenfell contractors 'should have known cladding was combustible' - Expert witness tells inquiry of 20 serious fires that meant danger of panels was well known in industr.

This evidence is published on the Grenfell Inquiry website - HERE.