On 19 October 2019, the House of Commons held its first Saturday sitting since 1982 (Falklands crisis). The purpose was to debate the new agreement reached with the European Union on Thursday 17 October and it was hoped by government that the House would vote in favour of the agreement - previous post 17 October.


The agreement had met with favourable reception from the Governor of the Bank of England (BBC News 19 October 2019).  The Director of the Confederation of British Industry (CBI), who repeatedly warned of the risks associated
with a no-deal departure, also cautiously welcomed the breakthrough - "If agreed by parliament, this deal unlocks a transition period, guarantees rights of the four million citizens living abroad in the UK and EU, and opens a pathway to a new EU/UK partnership. It would keep trade flowing freely across the island of Ireland and, most importantly, avoid a damaging no-deal scenario" - This is Money 18 October.

Any euphoria over the new arrangements always appeared unlikely to survive an encounter with MPs and this proved to be the situation.  The government put forward a motion: 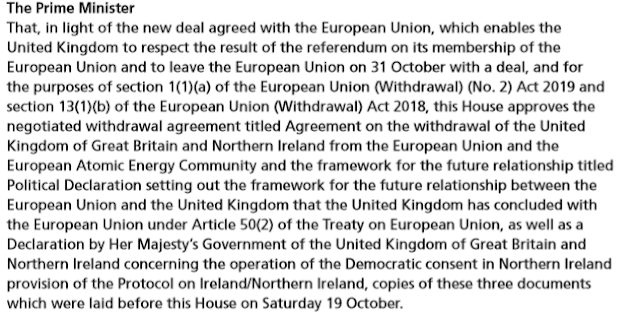 Had that motion been put to a vote it would have decided whether the House approved (a) the revised withdrawal agreement, (b) the revised Political Declaration, and (c) the Consent Declaration.  Votes (a) and (b) were required by legislation - European Union (Withdrawal) Act 2018 s.13 and the European Union (Withdrawal) (No 2) Act 2019.  The No 2 Act is discussed in this previous post.

Enter Sir Oliver Letwin MP (Conservative, West Dorset).  Sir Oliver and others raised an amendment - referred to as amendment (a) - to the Prime Minister's motion.

After a lengthy debate - see Hansard 19 October - the motion as amended was passed by 322 Votes to 306 - (majority 16). None of the further planned votes were proceeded with.

The voting breakdown is shown in this BBC diagram: 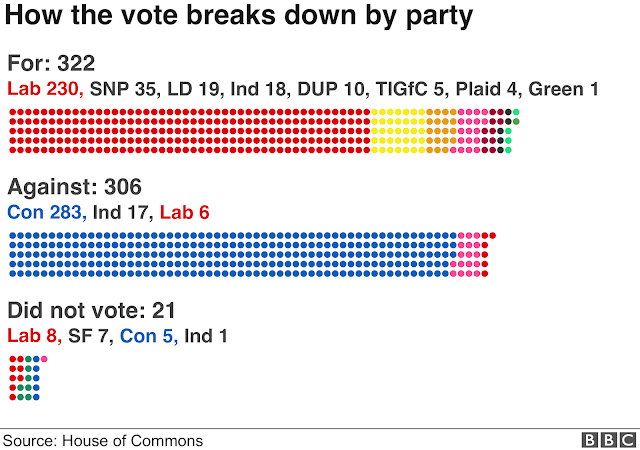 Voting by individual MPs is shown at The Guardian 19 October - How did your MP vote on the Letwin amendment.

The question then was whether the requirement in the European Union (Withdrawal) (No 2) Act 2019 to request an extension under Article 50 had been triggered.

The condition set out in s1(1) of the 2019 Act has not been met because, by 19 October, the agreement has not been approved by the House of Commons.  This appears to trigger the requirement to request the extension by sending to the EU the letter set out in the Schedule to the 2019 Act - and see s1(3) and 1(4).  Whether such a request will be granted is a matter for the European Council and it cannot be taken from granted that a request will receive a favourable response.  Such letters are normally sent via diplomatic channels.

"To anticipate the questions that will come from the Opposition, I will not negotiate a delay with the EU; neither does the law compel me to. I will tell our friends and colleagues in the EU exactly what I have told everyone in the 88 days in which I have served as Prime Minister: further delay would be bad for this country, bad for our European Union, and bad for democracy. Next week, the Government will introduce the legislation needed for us to leave the EU with our new deal on 31 October, and I hope that our European Union colleagues and friends will not be attracted, as those on the Opposition Benches—or rather, I should say, the Opposition Front Bench—are, by delay; I do not think that they will be. Then, I hope that hon. Members, faced with a choice on our new deal for the UK and the European Union, will change their mind—because it was pretty close today—and support this deal in overwhelming numbers."  [My emphasis]

It was indeed close - though not necessarily pretty!

The week beginning Monday 21 October will be a further interesting week.  The Leader of the House of Commons stated - "I should like to inform the House that Monday’s business will now be a debate on a motion relating to section 13(1)(b) of the European Union (Withdrawal) Act 2018, and I shall make a further business statement on Monday."

Does the 2019 Act have further impact?

The requirement placed on the PM to send a letter requesting an extension is expressly limited to 19 October.  Once the letter is sent, other sections of the Act come into play:

The Scotsman 18 October 2019 - Brexit: Edinburgh Court of Session rules out bid to stop an 'illegal' deal