Some thoughts on the process of choosing the Prime Minister.

On 24 May 2019, battered and broken by the stormy waters of Brexit, the Prime Minister (Rt. Hon. Theresa May MP) announced that she would resign from the leadership of the Conservative and Unionist Party.  Mrs May had been forced into this position by her party's MPs - (see the media articles - links below).

The resignation duly took place on 7 June and the party began the process of electing their new leader. At the time of writing,  two candidates remain in the race - Rt. Hon Boris Johnson MP and Rt. Hon. Jeremy Hunt MP.  Their names
will be put to a ballot of party members with the result being declared in late July.  Meanwhile, Theresa May continues as Prime Minister.  See the Ballot results at The Guardian 20 June.

The UK's system of representative democracy is that, in a general election, Members of Parliament (MPs) are elected to represent constituencies with one MP per constituency.  The electoral system is "first past the post" - i.e. the candidate with the largest number of votes becomes the elected MP.  Candidates for election, other than "independent" candidates, stand for election on the basis of a party manifesto published prior to the election and setting out, usually in broad terms, the policy proposals the party will seek to implement if elected.  Sometimes, a manifesto is clear.  For instance the Conservative manifesto of 2015 contained a commitment to "an in-out referendum by the end of 2017."   An apparently simple question which disguised an enormous degree of complexity. 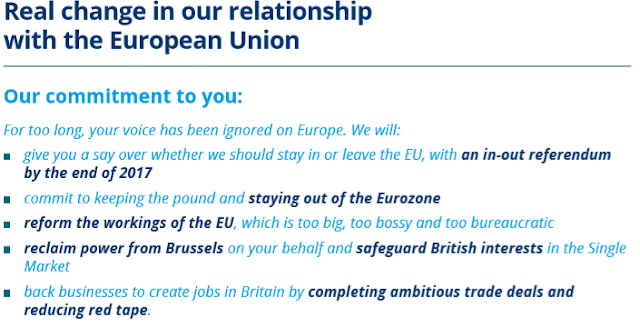 Even though party leaders have considerable influence with the electorate when deciding for whom to vote, a general election is not a process for choosing the PM.   Formally, the government is known as Her Majesty's Government and, in law, the appointment of Prime Minister is a matter for the Queen.

Appointment of PM after general election:

If a general election returns a single party with an overall majority in the House of Commons then no real question arises as to who should be appointed Prime Minister.  By convention, the leader of that party is appointed by the Queen.

Where the election has not returned a party with an overall majority, the process can be more difficult.  In 2010, the Conservative Party did not win an overall majority and the incumbent Prime Minister (Gordon Brown - Labour) remained in post until an agreement was reached between the Conservatives and Liberal Democrats, resulting in a full coalition government.  Once that agreement was reached, Gordon Brown resigned and the Queen appointed David Cameron as Prime Minister.  The Liberal Democrat leader (Nick Clegg) became Deputy PM.

In 2017, a general election was held on 8th June.  The Prime Minister hoped to capitalise on the perceived weakness of the Opposition and increase the majority held by her Party but this was not the result - General Election: The immediate outcome.  The Conservative Party emerged from the election in a weakened parliamentary position but was able to enter into a "confidence and supply" agreement with the Democratic Unionist Party (DUP) from Northern Ireland.  In those circumstances, Theresa May was able to continue as Prime Minister.

When a PM resigns:

When a Prime Minister resigns (or dies in office) a new PM has to be appointed.  One view of this scenario is that the government retains the mandate it obtained from the people at the previous general election.  The choice of Prime Minister is effectively determined by the party in power and a party selection process is required.  The Queen has no practical say in the matter and will appoint whoever emerges as winner.

Interestingly, it was not always like this.  In 1957, Sir Anthony Eden resigned without an obvious successor and the Conservative Party did not have an electoral process to produce a successor.   The Queen consulted senior Conservative Party figures and, acting on their advice, appointed Harold Macmillan.  In 1963, Macmillan resigned and, controversially at the time, Lord Home was appointed.  Home was a Conservative peer who then relinquished his peerage and obtained a seat in the House of Commons.  These events finally persuaded the Conservative Party to introduce an electoral system.  The Labour Party introduced a selection procedure in the late 1950s.  The introduction of party selection procedures therefore reduced the discretion held by the Crown.

A change of leadership could result in the party in power taking new policy directions and no longer retaining its mandate from the people.  For example, is there truly the mandate for a "no deal" hard Brexit which is not ruled out by the present Conservative party leadership contenders?  Here is the view of one notable Brexit commentator - Professor Chris Grey:

The present political situation is one of considerable difficulty because of Brexit which will, as a matter of EU law, take place on 31 October.  The result of the Conservative leadership election may not be known until late July.  On current plans, Parliament is to have its summer recess from 25 July until 3 September.  Party conferences are normally held in late September / early October.

The withdrawal agreement cannot be ratified by the UK government unless the House of Commons votes to approve it and that is now highly unlikely.  The EU has, at least so far, been adamant that the withdrawal agreement will not be renegotiated though there is scope for more work to be done on the Political declaration.  The withdrawal agreement is very much the result of the "red lines" set by Theresa May and the tantalising prospect arises, though it is far from clear, that a new PM might seek some renegotiation on the basis of either different lines or amended lines.  The EU might decide that it is in its interests to engage in such negotiation and then a further extension to Article 50 becomes likely. All of that is in the realm of speculation.


A "no deal" Brexit looks increasingly likely and there may be little Parliament can do to prevent it.  (Even more so if Parliament is not sitting and a new PM sees no urgency in  recalling it)!  See Institute for Government - Maddy Thimont Jack - A new prime minister intent on no deal Brexit can't be stopped by MPs

In the present situation, it cannot be in the best interests of the UK to have a selection process taking place over such an extended period of time.  For the future, a lengthy timescale could be avoided by requiring the party in power to at least have an agreed Deputy PM.  A further reform could be for the party in power  to restrict the selection of leader to MPs alone and not the wider party membership.  MPs would select the individual who, in their view, is best placed to lead them in the House of Commons.  This would also ensure that those MPs - and those MPs alone - were politically accountable to the electorate for what they had done.  A party not in power could follow its own processes.


Under present law, the holding of a general election follows a dissolution of parliament brought about under the terms of the Fixed-term Parliaments Act 2011 section 2.  Suppose that, following the outcome of the present Conservative leadership election, there is a vote of no confidence in Her Majesty's government.  If the government loses that vote then a general election could follow.  A further way for there to be a general election is that MPs vote for an early parliamentary general election.

A change to the law would be required to mandate that a general election be held within a reasonable period (e.g. 6 months) if the party in power deliberately changes its party leader.   Such a change would arguably be more democratic and give political legitimacy to the new party leader.   However, it is unlikely to be popular with party politicians and, for that reason, legislation along these lines appears to be an unlikely prospect.

In June 2007, the Labour Party changed from Tony Blair to Gordon Brown but an election was not held until 2010.  The coalition government followed and lasted until 2015 when a general election was held returning a minority Conservative government under David Cameron.

In June 2016, following the EU referendum, the Conservatives changed from David Cameron to Theresa May.  Although a general election was not required until 2020,  May chose to "go to the country" in 2017.   The next election will be held in 2022 unless an early election is brought about under the Fixed-term Parliaments Act.

Prospect Magazine 26 June - Make no mistake: Britain is on the cusp of a constitutional crisis of epic proportions


Some media articles on the resignation of Theresa May: