As the Brexit Clock ticks

The Brexit clock is ticking.  It is now 56 days since the Article 50 "flexible" extension to 31 October was agreed on 10 April 2019 - read the Council Conclusions and Council Decision 10 April.   147 days are left until 31 October.  The 56 days have seen the elections for the European Parliament, the announcement by Theresa May that she is to resign as Conservative Party leader on 7 June, and the commencement of a Conservative Party leadership election.   The seemingly intractable problem of Brexit remains.

In the leadership election
there are 11 candidates and their positions on Brexit are summarised in this BBC article published on 5 June 2019.  There seems to be no sense of urgency about this election even though one-third of the Brexit extension has now passed.  The winner will be appointed Prime Minister (PM) but this might not be until late July leaving minimal time for the implementation of any change of policy.

The 2017-19 session of Parliament is planned to end with prorogation in the summer of 2019.  The usual summer recess is from late July until early September - e.g. 24 July to 4 September 2018.  Once Parliament resumes there is then usually a further recess to allow Party Conferences to take place.  By now we are well into October.

Even if the Council were to depart from that position, any renegotiation will take time and may therefore require a further extension of Article 50.  (Presumably that would be forthcoming IF the Council decided to open the agreement).  If the Council does not alter its position then the likelihood of a no deal Brexit rises significantly.

Other leadership candidates appear determined that the UK will leave the EU on (or before) 31 October without a withdrawal agreement in place - referred to as "no deal" or "WTO terms."   That view disregards the consistently stated concerns of bodies such as the Confederation of British Industry (CBI) - BBC News 31 May - which claims that a no deal Brexit should not even be considered.  It is also disregards key facts about trading on WTO terms - see UK in a Changing Europe - What would trading on WTO terms mean.  It is remarkable that any future Prime Minister seems willing to ignore such matters.

The House of Commons Library has drawn attention to the need, in a no deal Brexit, to replace a considerable number of the EU's external agreements - Research Briefing 8370.   The EU has over a thousand international agreements with non-EU countries, covering trade, aviation, nuclear co-operation and other issues. These will cease to apply to the UK when it leaves the EU.   In March 2019, the Government released a list of 158 international agreements, across different policy areas, that it is seeking in order to replace current arrangements should the UK leave the EU without a deal.

One candidate - Rory Stewart MP - argues that a no-deal Brexit will be "catastrophic" and is "undeliverable" and "unnecessary."  It is reported that Stewart would focus on getting Theresa May's existing deal through Parliament as there is "no evidence" the EU will offer a different deal.  This is unlikely to be attractive to Conservative MPs or to the 120,000 or so party members who will be able to vote in the leadership election.  Also, in late March 2019, the withdrawal agreement was rejected by the House of Commons and it is hard to see how it will get through without significant changes particularly regarding the Ireland backstop.

There are further suggestions in the air!  One is that the new PM could prorogue Parliament in order to push through a 31 October "no deal" Brexit.  Removing Parliament is surely a device for use by despots though it certainly appears to be an attractive proposition for some and Dominic Raab MP has refused to rule it out - The Scotsman 5 June 2019.  Such chicanery would be intensely controversial and would involve HM The Queen in this divisive political question.

The Speaker of the House of Commons has said that a prorogation cannot be used in this way - The Guardian 6 June.   “That is simply not going to happen. It is just so blindingly obvious that it almost doesn’t need to be stated, but apparently, it does and therefore I have done,” he told MPs.

Legislation for no deal?

1.  The Miller / Dos Santos litigation ruled that legislation was required to authorise the government to give notice that the UK would be leaving the EU.  Parliament's response was the 2017 Act authorising the Prime Minister to give notice in accordance with Article 50(2) of the Treaty on European Union.  Article 50 permits a State to leave the EU and the article clearly envisages either leaving without a deal (in effect, the default position) or with a withdrawal agreement.

2.  The 2018 Act was enacted with a view to providing a functioning statute book on the day the UK leaves the EU.  At the time of writing, the 2018 Act is not fully in force.  For example, section 1 of the Act will repeal the European Communities Act 1972 but a commencement order for section 1 is required.

3.  Both Acts were passed in the knowledge that, under Article 50, a no deal Brexit is the default position but the legislation does not specifically address a "no deal" situation.

4.  The government has previously considered that a Bill is required to implement the withdrawal agreement BUT the scenario now under discussion presupposes that there is no such agreement to implement.

5.   Even in a "no deal" s situation the question of a financial settlement will arise.  The House of Lords EU Committee considered this point in their 15th Report of the 2016-17 session and concluded "While the legal advice we have received differed, the stronger argument suggests that the UK will not be strictly obliged, as a matter of law, to render any payments at all after leaving" - see House of Lords report.  But, the report went on to state -

It remains to be seen whether this angle will be developed further by politicians or lawyers.  As always in situations of doubt, clearly drafted and specific legislation would be the safer legal route to follow.

Most of the leadership candidates are ruling out a further referendum.  Sam Gyimah MP proposes that one should be held to break the impasse. (Note 11 June: Mr Gyimah decided not to go ahead with his candidacy).  Rory Stewart MP proposes citizens' assemblies "to thrash out a compromise" but there is no clarity as to how those assemblies would be formed and operate.  Whatever its merits, a further referendum therefore appears unlikely.

This option has disappeared from the Brexit radar.  There seems to be no real likelihood of a Conservative government under any of the leadership contenders taking this course and none are canvassing for it.

Use the time wisely:

Donald Tusk (European Council President) said that the UK should use the Brexit extension wisely.  He also said that the EU remained willing to reconsider the political declaration on the future relationship “if the UK position were to evolve”.  Sadly, I do not see the UK's position as evolving at all.  The time is not being used wisely.

Huge costs have been incurred by government in preparation for Brexit, the UK's economy has already suffered to the tune of £600m per week or, according to a Goldman Sachs report, a loss of 2.5% of the UK GDP.   There is also loss of influence due to the relocation of agencies such as the European Medicines Agency (moved to Amsterdam) and the European Banking Authority (moved to Paris).  The EBA is a Single Market institution operating under EU law. No way could it remain in a country that was leaving the Single Market and repudiating the CJEU’s jurisdiction.

The most likely outcome of this madness seems to be a no deal Brexit.  It is an outcome which the UK is stumbling towards as the Brexit extension is squandered.  Politicians appear to be unwilling to recognise the actual evidence that Brexit is harmful and will be more so in the future.  They also refuse to see the realities as they continue to argue that the withdrawal agreement will be changed despite the EU saying that negotiations on the WA are over.

The withdrawal agreement remains on the table and could be accepted "warts and all."   This option has been rejected by the House of Commons and is unlikely to be the route now taken even though Brexit will have been "delivered" and the parties could then get on with the detailed negotiations necessary for the future relationship including avoidance of the Ireland backstop. 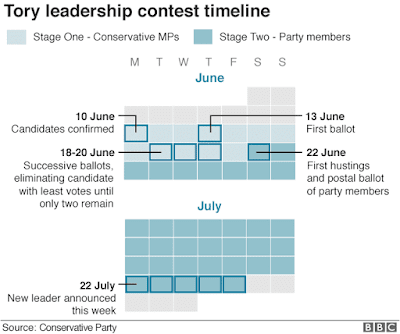 Seven candidates remained after the first ballot held on 13 June but Mark Hancock MP withdrew subsequently having received 20 votes in the first ballot.
Posted by ObiterJ at Thursday, June 06, 2019