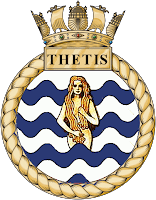 In Conway v Rimmer [1968] AC 910, [1968] UKHL 2 the House of Lords (Lords Reid, Morris, Hodson, Pearce and Upjohn) brought about a major change in the way in which claims, usually by Ministers, to avoid disclosure of evidential material were to be handled.  Such claims were based on what was then referred to as "Crown Privilege."  That term has been replaced by Public Interest Immunity (PII).

Thetis, a name from Greek mythology, was also the name given to a T-class Royal Navy submarine built and launched in 1938 by Cammell Laird, Birkenhead.

On 1 June 1939, HMS Thetis undertook diving trials in Liverpool Bay to the north of Llandudno.  103 men were on board.  Due to excessive water intake via the torpedo tubes, Thetis sank and her bows became stuck in the sea bed.  She was unable to get free.  Four men (including the captain) escaped via a small escape hatch but a build up of carbon dioxide in the submarine resulted in the deaths of the other 99.

It took
several months to salvage Thetis.  She was repaired and recommissioned as HMS Thunderbolt and served in the Atlantic and Mediterranean theatres until she was lost with all hands on 14 March 1943.  This makes Thetis one of the few military vessels that have been lost twice with her crew in their service history.  This lamentable tragedy is described in this Youtube Video and also in the book HMS Thetis: Secrets and Scandals by David Roberts.  An inquiry took place under the chairmanship of Mr Justice Bucknill.

Legal actions were brought by those representing (or dependent upon) some of the deceased.  The actions were claims in tort for negligence against Cammell Laird and three other persons.  The plaintiffs asked for the production of certain documents including plans of the submarine but this was refused on the basis of what was then known as Crown Privilege.  In Duncan v Cammell Laird [1942] AC 624, [1942] UKHL 3 the House of Lords upheld the Minister's claim for privilege.  Viscount Simon LC gave the single speech and the others simply agreed - Lords Thankerton, Russell of Killowen, Macmillan, Wright, Porter and Clauson.  Essentially, it was held that the Minister could withhold the requested material in the public interest and his decision was conclusive.

The actual decision in Duncan was supportable against the background of the need to keep secret the design of the vessel during wartime but the law was capable of denying justice to claimants whenever Ministers chose to plead Crown Privilege.  Some of the rigour of the law was ameliorated following a statement on 6 June 1956 by the Lord Chancellor, Lord Kilmuir.  In this short debate it was noted that the Bar Council was anxious for a judicial decision on the matter.  It was not until 1968 that the judicial decision came about.

In Conway v Rimmer [1968] AC 910, [1968] UKHL 2 a five member appellate committee of the House of Lords disapproved the approach taken in Duncan v Cammell Laird.  It held that it was for the court to decide whether Crown privilege should apply and also it was for the court, not the Minister, to balance the competing interests.

Conway was a probationer constable in the Cheshire Police and Rimmer was a Superintendent in the force.  Conway was prosecuted for larceny (as theft was then called) of a torch which had been found in the locker of another probationer constable.  Although Conway was acquitted he was nevertheless dismissed from the police.  Conway sued Rimmer for malicious prosecution and he wished to obtain disclosure of documents including reports written about him when he was in the police service.  The Home Secretary - Roy Jenkins - claimed Crown Privilege  on the basis that the reports were within a CLASS of documents comprising confidential reports to chief officers of police relating to the conduct, efficiency and fitness for employment of individual police officers.


"It is universally recognised that here there are two kinds of public interest which may clash. There is the public interest that harm shall not be done to the nation or the public service by disclosure of certain documents, and there is the public interest that the administration of justice shall not be frustrated by the withholding of documents which must be produced if justice is to be done. There are many cases where the nature of the injury which would or might be done to the nation or the public service is of so grave a character that no other interest, public or private, can be allowed to prevail over it. With regard to such cases it would be proper to say, as Lord Simon did, that to order production of the document in question would put the interest of the state in jeopardy. But there are many other cases where the possible injury to the public service is much less and there one would think that it would be proper to balance the public interests involved. I do not believe that Lord Simon really meant that the smallest probability of injury to the public service must always outweigh the gravest frustration of the administration of justice."

After the House of Lords decision in R v Lewes Justices ex parte Home Secretary [1973] AC 388, the term Crown Privilege fell out of favour and was replaced by Public Interest Immunity (PII).  Lord Reid said that he thought the expression Crown Privilege was 'wrong and may be misleading.'  Lord Simon of Glaisdale said that Crown privilege was a 'misnomer and apt to be misleading.'

Since the landmark decision in Conway v Rimmer, Public Interest Immunity has been invoked in many situations.   The law has developed to enable the courts to strike an appropriate balance between the need to protect national security (and other important public interests) and the need to ensure fairness.  This post does not trace all the developments subsequent to Conway v Rimmer but two further points should be noted.

PII may be claimed in criminal cases but the balance is struck somewhat differently.  In a criminal context, the general rule is that, if material is necessary to prove the defendant's innocence or avoid a miscarriage of justice, then "the balance comes down resoundingly in favour of disclosing it": R v Keane [1994] 1 WLR 746 per Lord Taylor of Gosforth CJ.  If the Crown still does not wish to disclose the material, it can and must forgo further prosecution.  See the judgment of Lord Mance in Al Rawi v Security Service [2013] UKSC 34 at para 101.

The Justice and Security Act 2013 has introduced a closed material procedure for certain types of case.  The relationship between that procedure and PII is problematic.  In Al Rawi, Lord Dyson said at para 41 -  'In many ways, a closed procedure is the very antithesis of a PII procedure. They are fundamentally different from each other. '

See the Explanatory notes to the 2013 Act.