In a televised interview, Mr Nigel Farage would not reveal the name of a donor who gave s "small" donation of £100,000 to his recently formed Brexit Party - The New European 5 May 2019.  Mr Farage told his interviewer - Sophy Ridge of Sky News - that the name would be revealed at the end of July which is, of course, well after the European Parliament Elections currently scheduled for 23 May 2019.  In an earlier interview with LBC's Iain Dale, Mr Farage was similarly "coy" about sources of money though he said that 70,000 people had registered at £25 each (= £1.75m).

According to
the Electoral Commission, the Brexit Party was registered from 5 February 2019 with officers Nigel Farage, Tracy Knowles and Phillip Victor Basey.  There are no "Accounting Units" for this party.  Accounting Units are constituent or affiliated units of a political party, including constituency parties, which operate separate finances from the main party.

Membership numbers of political parties are not particularly high in the UK. Some 2018 data is available via this House of Commons Research Briefing: 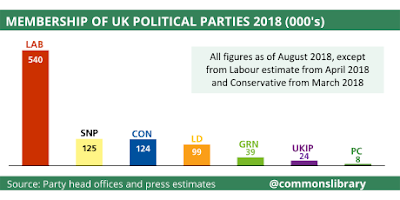 Brexit Party membership is in the region of 85,000.

The law on donations to parties is in the Political Parties, Elections and Referendums Act 2000 Act 2000 and, in particular, Part IV of the Act.   Section 62 requires Quarterly Donation Reports - January to March, April to June, July to  September, and October to December.  Section 63 requires WEEKLY Donation Reports during GENERAL ELECTION periods.  Section 67 enables the Secretary of State to make an Order to apply section 63 to other forms of election including European Parliamentary Elections (EPE).  I am not aware of any such Order having been made for the 2019 EPE. As a matter of law, without such an Order, parties are only obliged to submit Quarterly Returns.

The Electoral Commission has published:

Donations and Loans to Political Parties