The Rt. Hon. Gavin Williamson CBE MP is Member of Parliament for South Staffordshire and was appointed Secretary of State for Defence in November 2017.  On Wednesday 1 May 2019 he was dismissed.

The National Security Council (NSC) met on 23 April 2019 and it appears that one of the matters discussed was the possibility of involvement by the Chinese company Hauwei in the provision of 5G technology in the UK.  On 24 April the Telegraph published a story (£) with the headline - "Theresa May defies security warnings of ministers and US to allow Huawei to help build Britain's 5G network."

It was clear that
there had been a leak following the NSC meeting and the Prime Minister commissioned the Cabinet Secretary (Sir Mark Sedwill) to establish an investigation.  Sedwill has a dual role since he is also the National Security Adviser and attends NSC meetings in that capacity. He is the 4th individual to hold this post.   Full details of how the investigation was conducted are not publicly available but it appears that interviews took place with those who attended the NSC meeting and examination of their mobile telephones.  It is not known who actually conducted the interviews.

During Williamson's time in office there were differences of opinion between him and Sedwill.  In particular, a difference is known to have existed over the Strategic Defence and Security Review - see the discussion at Politics.co.uk - "Whisper it Gavin Williamson is doing pretty well at the MoD"

The letter sent to Williamson by the Prime Minister indicates that she confronted him with the findings of the investigation.  The letter is reproduced in this Metro report of 2 May 2019 and the following is an extract - 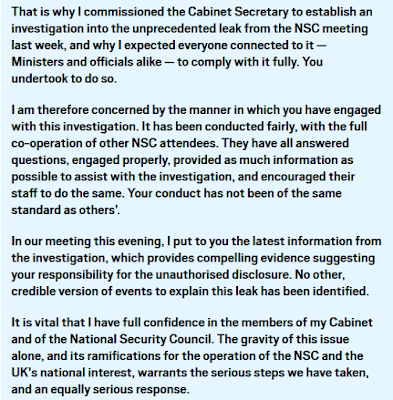 and then, the Prime Minister wrote -

That is why I commissioned the Cabinet Secretary to establish an investigation into the unprecedented leak from the NSC meeting last week, and why I expected everyone connec

Read more: https://metro.co.uk/2019/05/02/gavin-williamson-face-prison-huawei-national-security-council-leak-9378974/?ito=cbshare
Twitter: https://twitter.com/MetroUK | Facebook: https://www.facebook.com/MetroUK/
Mr Williamson responded by letter and denied that the leaks originated either from himself or his Department.  He was confident that a "thorough and formal inquiry" would have vindicated his position.  His letter stated that he was given the opportunity to resign but that would have been to accept that - "I, my civil servants, my military advisers or my staff were responsible: this was not the case."

A fact clearly against Mr Williamson is that he is known to have had an 11 minute telephone conversation with Telegraph journalist Steven Swinford on the evening of 23 April - see Huffington Post 1 May.  The details of that conversation are not publicly known but Mr Williamson maintains that he chatted about the Tory leadership, Brexit and other matters but NOT any matter dealt with at the NSC meeting.  It remains to be seen whether the journalist will do anything to confirm or contradict Williamson's account.

The Code at para 1.6 states - "Ministers are personally responsible for deciding how to act and conduct themselves in the light of the Code and for justifying their actions and conduct to Parliament and the public. However, Ministers only remain in office for so long as they retain the confidence of the Prime Minister.  She is the ultimate judge of the standards of behaviour expected of a Minister and the appropriate consequences of a breach of those standards."  [My emphasis].

It is to be noted that the Prime Minister said in her letter to Mr Williamson that she could no longer have full confidence in him as Secretary of State for Defence and a Minister in her Cabinet.

This lack of confidence is the basis of Williamson's dismissal.  Nevertheless, it is reported that Williamson will receive £17,000 severance pay and will retain his position as a member of the Privy Council - The Independent 2 May.


The question from Mr Tom Watson MP (Labour) was "To ask the Prime Minister to make a statement on the findings of the inquiry into the National Security Council leak."

Mr David Lidington MP responded for the Cabinet Office.  He said - "The problem with this particular case was not so much the material disclosed as the forum from which the leak came. The Prime Minister set up the inquiry and took the decisions she took yesterday in order to maintain the integrity and secrecy that is essential for the proper conduct of the business of the Government of the United Kingdom, whichever party happens to be in office. As far as I am aware, the inquiry was conducted on the basis of confidentiality throughout its proceedings. It came to conclusions that were reported to my right hon. Friend the Prime Minister, and she took the decisions she announced yesterday.


This boils down to what is set out in paragraph 1.6 of the “Ministerial Code”:

“Ministers only remain in office for so long as they retain the confidence of the Prime Minister. She is the ultimate judge of the standards of behaviour expected of a Minister and the appropriate consequences of a breach of those standards.”

It is essential not to jump to conclusions that an offence under, for example, the Official Secrets Act 1989 was definitely committed.  That is by no means clear but inevitably such questions arose.

The appropriate provision appears to be section 1(3) - "A person who is or has been a Crown servant ..." since the term "Crown Servant" includes a Minister of the Crown - see s.12.  Key words in section 1(3) are that the disclosure must be a "damaging disclosure" and, for that term, see section 1(4).  Prosecutions require the consent of the Attorney General - section 9.  The offence is triable either way but for trial on indictment the maximum sentence is a term of imprisonment not exceeding two years or a fine or both - section 10.

Interestingly, it is not entirely clear that use of section 1(1) is ruled out if Ministers are persons notified under section 1(1)(b).

A criminal investigation appears unlikely in this case even though, if Williamson's account is correct, it could possibly clear his name.  It appears that there is no desire within government to call in the Police and the Metropolitan Police Commissioner is reported as saying that a referral is required.

David Lidington said during the debate - "The unauthorised disclosure of any information from Government is serious, and especially so from the National Security Council. The Prime Minister has said that she now considers that this matter has been closed, and the Cabinet Secretary does not consider it necessary to refer it to the police, but we would of course co-operate fully should the police themselves consider that an investigation were necessary."

In response Tom Watson said - "The essential point here is that the Prime Minister has sacked the Secretary of State for Defence because she believes there is compelling evidence that he has committed a crime, but despite that she does not believe that he should face a criminal investigation. Where is the justice in that? In what world is it acceptable that the Prime Minister should be the arbiter of whether a politician she believes is guilty of criminal conduct in office should face a criminal investigation?"

Sir Edward Leigh MP asked- "In this country, we believe in natural justice. In any company, the civil service or anywhere else, someone accused of a disciplinary offence, let alone a criminal offence, is given a chance, in an impartial forum, to prove their innocence. As a matter of natural justice, how will the former Defence Secretary now be given an opportunity to prove his innocence?"


Williamson was one of at least five cabinet ministers at the security council meeting who opposed allowing Huawei into the UK’s 5G network, something the US and other allies consider to be an intelligence risk because of the firm’s alleged ties with the Chinese state.  In October 2018, BT Group announced that it had been phasing out Huawei equipment from "core" components of its wireless infrastructure (excluding parts such as phone mast antennas), including its 5G services, and the Emergency Services Network project.   In December 2018, Williamson expressed "grave" and "very deep concerns" about the company providing technology to upgrade Britain's services to 5G.   He accused Beijing of acting "sometimes in a malign way."

Huawei’s 5G technology has faced challenges in the US and New Zealand, and has been banned from use in Australia where the government said the use of certain suppliers of 5G was an unacceptable risk.

On 24 April - the day after the NSC meeting - it was reported that Theresa May was preparing to allow Huawei to provide some aspects of 5G within the UK - The Independent 24 April - though the report points out that no final decision has been taken.

Any decision regarding Huawei will have to bear in mind any risks to trade with China in the post-Brexit world - see Politico 14 April 2019 "Brexit Britain's Huawei conundrum."   It will also be necessary to recognise the stance being taken by allies over Huawei involvement in 5G.

"One explanation for the U.K.'s internal dispute over Huawei is that the country is heavily invested in the prospect of future trade with China. Trade has boomed over the past decade, and some ministers are looking to Beijing for trade opportunities to offset any dropoff in trade with the European Union as a result of the U.K. leaving the bloc."

The Guardian 3 May - Williamson hits back at haphazard leak inquiry

The Guardian 3 May - How will history judge Gavin Williamson?

That is why I commissioned the Cabinet Secretary to establish an investigation into the unprecedented leak from the NSC meeting last week, and why I expected everyone connec