On 25 May, from the street outside the Leeds Crown Court, Mr Robinson used Facebook Live to broadcast as defendants arrived for the morning court hearing.  The broadcast lasted over an hour and Police Officers outside the court building were aware for most (perhaps all) of that time that he was "live streaming."  Mr Robinson was arrested and, the same day, he was held to be in contempt of court by His Honour Judge Geoffrey Marson QC who was conducting the second of three "linked trials" at the Crown Court in Leeds.

There was a "postponement order" in place under the Contempt of Court Act 1981 section 4(2).  Such orders are often to be found where there is a series of "linked trials."  The aim of the order is to postpone reporting which could be prejudicial to a fair trial of defendants in either the present trial or a subsequent trial..

(1) Subject to this section a person is not guilty of contempt of court under the strict liability rule in respect of a fair and accurate report of legal proceedings held in public, published contemporaneously and in good faith.

At the hearing, Mr Robinson was represented by Mr Matthew Harding, an experienced barrister.  Mr Robinson admitted the contempt and expressed remorse.

Mr Robinson had "previous" because he had been held to be in contempt of court in May 2017 at the Crown Court in Canterbury.  For that he had been committed to prison for 3 months suspended for 18 months.  See Judiciary - Yaxley-Lennon - Committal for Contempt of Court 22 May 2017

The outcome at Leeds was that Judge Marson committed Mr Robinson to prison for 10 months for the contempt at Leeds and also activated the Canterbury suspended term.  Hence, a total of 13 months.

The Judiciary website did not publish a report of the committal for contempt at Leeds although either a written judgment or a transcription of an oral judgment should be provided in accordance with this Practice Direction - (paras 13 to 15).

When it was first announced that there was to be an appeal it was said that it would be an appeal against sentence as opposed to challenging the committal for contempt itself.  However, at the 18 July appeal hearing Mr Robinson sought to have both the Leeds and the Canterbury findings quashed because of procedural errors.  Mr Jeremy Dein QC - representing Mr Robinson - argued that procedural "deficiencies" had given rise to "prejudice."  Mr Dein also submitted that the term of imprisonment was "manifestly excessive" and "insufficient" regard had been given to personal mitigation.

The reporting restriction relating to the trials at Leeds remains in force.

The Court of Appeal dismissed the appeal in respect of the committal for contempt at Canterbury Crown Court.  However, the record of that committal is to be amended to use the language of committal rather than the language of sentencing. 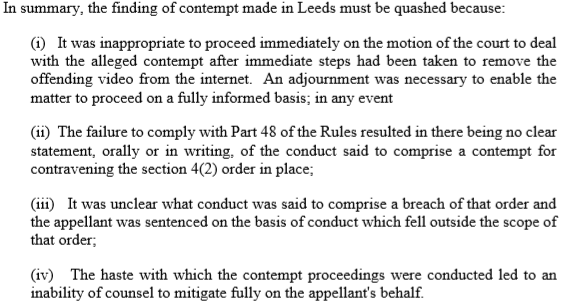 It should be noted what the court stated at para 78 - 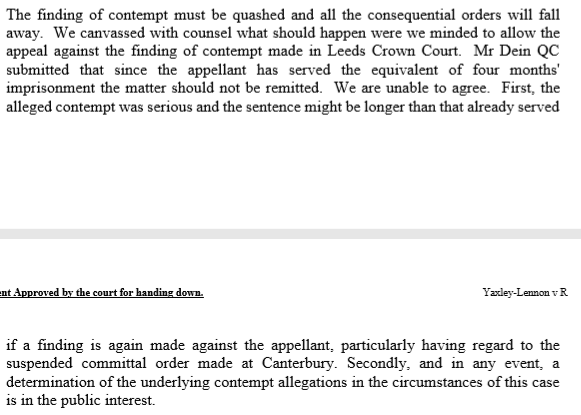