The committee is concerned that "intimidatory behaviour is already affecting the way in which MPs are relating to their constituents."  It has "put off candidates who want to serve their communities for standing for public offices, and threatens to damage the vibrancy and diversity of our public life."


The committee's terms of reference included establishing whether measures in place to address intimidatory behaviour, including the criminal law, are effective and enforceable.  The report asks the government to consult on the introduction of a new offence in electoral law of intimidating Parliamentary candidates and party campaigners.

We believe that any new electoral offence that is introduced should not have any wider scope than
the existing criminal law in respect of intimidatory behaviour. No behaviour which is currently legal should be made illegal. However, we believe that the introduction of a distinct electoral offence will serve to highlight the seriousness of the threat of intimidation of Parliamentary candidates to the integrity of public life and of the electoral process,  and will result in more appropriate sanctions.

We believe that specific electoral offences will also serve as an effective deterrent to those who are
specifically targeting Parliamentary candidates and their supporters.

English Law already has a considerable range of offences which are capable of being used to deal with intimidatory behaviour.  The report contains a table at page 68 setting out a list of existing offences ranging from common assault to offences against the Public Order Act 1986,  "stalking" (Protection from Harassment Act 1997), offences under the Communications Act 2003 s.127 and the Malicious Communications Act 1988.

Electoral law can overlap with and complement the criminal law, such that offences with criminal
sanctions can also involve sanctions under electoral law. These sanctions are specific to the election process, such as being barred from voting for a certain period, or removal from the electoral register.

Such sanctions recognise that these offences, such as undue influence or electoral fraud, are offences against the integrity of the electoral process, and that it is therefore appropriate that individuals face sanctions relating to their own privileges within that process.

In February 2016, the Law Commission published an interim report on Electoral Law.  Recommendations 11-1 to 11-9 concern Electoral Offences and, in particular, Recommendation 11-4 stated that "Undue Influence" should be restated as offences of intimidation, deception and improper pressure.

Democracy requires that political candidates subject their views to the general public and robust challenges are to be expected.  Some challengers will be outspoken: others will be ill-informed.  Those are the ingredients of political debate but, as the report amply shows, there have been times when conduct has become criminal.  The report recommends a consultation on the introduction of a new offence in electoral law of intimidating.  Given the range of existing offences, one wonders whether another offence is strictly necessary though a new offence might permit the additional sanctions referred to earlier.  Further details of any government proposal is awaited and in a speech delivered in Manchester on 6th February the Prime Minister indicated that the recommendations of the report are to be implemented. In December, Amber Rudd said that the government would consider the recommendations in detail, and respond to them in due course. 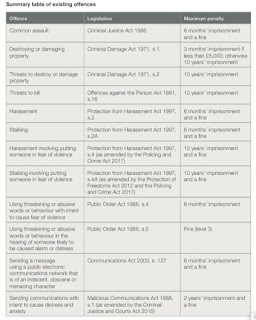