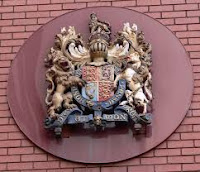 A blogpost in early January looked at the Parole Board following its decision that convicted rapist John Worboys could be released on licence.  On 7th February, permission was granted for a judicial review of the decision.  The review will be heard in March - see The Guardian 7th February 2018.  Throughout the hearing the judge - Sir Brian Leveson P - addressed Worboys by the name he now uses, John Radford.

Julian Assange, founder of Wikileaks, has been living in the Ecuadorian Embassy in London since June 2012.  His extradition to Sweden was ordered on 24th February 2011.  Appeals against that order were dismissed including an appeal to the Supreme Court of the UK - judgment.  On 28th June 2012 a notice to surrender to Belgravia Police Station was served on Mr Assange who by then was resident in the Ecuadorian embassy. He did not attend the police station and a warrant for his arrest was subsequently issued by Westminster Magistrates' Court.  On 26th May 2017, following  discontinuance of the underlying Swedish proceedings and the cancellation of the arrest warrant issued in Sweden, the European Arrest Warrant was withdrawn before Westminster Magistrates’ Court.  The Senior District Judge (Chief Magistrate) Emma Arbuthnot had to decide whether the arrest warrant issued - under section 7 of the Bail Act 1976 - remained in force when the extradition proceedings have terminated and no proceedings under section 6 of the Bail Act have been initiated.  The Chief Magistrate's judgment is available via the Judiciary website.  The decision was that the warrant remains in force.

The continued existence of the warrant makes Mr Assange liable to arrest and subsequent prosecution for the Bail Act 1976 section 6 offence.  This may not actually be Mr Assange's principal concern.  It is repeatedly reported - e.g. HERE - that he fears extradition to the United States of America.  That would require an extradition request from the USA as occurred in the next case to be considered ......

Update 13th February - The Senior District Judge has handed down a further judgment in which she dealt with arguments that it would not be in the public interest to prosecute Mr Assange under the Bail Act 1976 s.6.  The judge rejected those arguments.  Her judgment considers the United Nations Working Group report of January 2016 which was the subject of this blogpost of 5th February 2016.

Lauri Love v The Government of the USA and Liberty [2018] EWHC 172 (Admin) - Lord Burnett CJ and Ouseley J - was an appeal to the High Court from the decision of District Judge Tempia, sitting at Westminster Magistrates’ Court on 16 September 2016, to send his case to the Secretary of State for the Home Department for her decision whether to order his extradition to the United States of America, under Part 2 of the Extradition Act 2003.  The USA is a category 2 territory under that Act.  On 14 November 2016, the Home Secretary ordered his extradition.  The appeal was successful.  The "forum bar" - Extradition Act 200 s.83A - operated in this case to prevent extradition to the USA.  Additionally, the court held that extradition would be oppressive in this case - Extradition Act 2003 s.91.

North London Coroner and a "Cab Rank" rule for burials -

A judicial review is in the pipeline against a "cab rank" rule adopted for burials by the Coroner for North London.  Permission for the review has been granted and it is to be heard on 27th and 28th March.  The Coroner - Mary Hassell - adopted a policy that no death was to be prioritised over any other because of the religion of the deceased or family.  More details HERE.

On 8th February the following Supreme Court judgments were handed down:

For those with interest in the law of tort (negligence) the Robinson case will be of particular interest.  The Police were held to be liable for injury caused to Mrs Robinson (age 76) at a time when they were making an arrest of a suspected drug dealer.