Tony Blair (and others) will not face trial for "aggression" 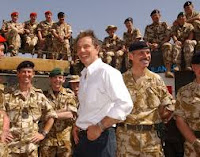 The war against Iraq began on 20th March 2003.  It caused deep divisions among the people of the UK.  On 18th March 2003, the House of Commons - in which the Labour Party held a large majority - passed a motion supporting the war - 396 votes to 217.  At the time, Tony Blair was Prime Minister; Jack Straw was Foreign Secretary and Lord Goldsmith QC was Attorney General.

In November 2016, District Judge Snow at City of Westminster Magistrates Court was asked to issue a summons to commence a private prosecution of Tony Blair, Jack Straw and Lord Goldsmith for the offence of "aggression."  The District Judge refused to issue a summons on the basis that aggression is not an offence known to the criminal law of England and Wales - see the House of Lords decisions in R v Jones and others [2006] UKHL 16 and R (Gentle) v The Prime Minister and others [2008] UKHL 20.

Should the High Court have allowed the judicial review to proceed so that the UK Supreme Court could have the opportunity to reconsider the House of Lords decision in Jones?  The High Court held that it was required to form a view on the prospects of success of any claim and that there was no reason, let alone a compelling reason, for the Supreme Court to depart from Jones.

Prospect Magazine 31st July - Michael Mansfield QC and Antonia Benfield - As lawyers in the case against Tony Blair, this is why accountability on Iraq remains elusive