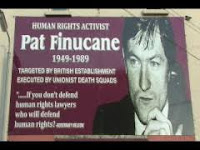 Over 28 years ago, Northern Ireland lawyer Patrick Finucane was gunned down at his north Belfast home whilst he was having dinner with his wife Geraldine and their three children.  Mr Finucane was 39 years old and from a Republican family.  As a solicitor he had advised members of the IRA but he had also represented Protestants accused of terrorist offences.  The British government promised to hold a public inquiry and that promise was made to both Mrs Finucane and to the Government of the Republic of Ireland, the political parties at the Weston Park Conference and to the general public.  See the Good Friday Agreement Implementation Plan 1st August 2001.

In 2010, when the Coalition government was formed, a decision was taken to hold a Review rather than a Public Inquiry.
The review was conducted by Sir Desmond de Silva QC and reported in 2012 but the failure to hold a public inquiry has been the subject of judicial review in the courts of Northern Ireland - see Court of Appeal Northern Ireland at  [2017] NICA 7.  The Supreme Court has granted Mrs Finucane permission for an appeal "In the matter of an application by Geraldine Finucane for Judicial Review (Northern Ireland) UKSC 2017/0058."

Mrs Finucane argues that the decision-making process had been pre-determined and the promise made to her that a public inquiry would be held had been unlawfully frustrated.  Mrs Finucane also questions whether the decision is compatible with Article 2 of the European Convention on Human Rights.  (Regarding Article 2 see McCaughey and Quinn's Application - [2011] UKSC 20).

Dates for the Supreme Court hearing remain to be announced. Court sittings will resume at the start of the 2017/18 legal year which begins with the Michaelmas term on Monday 2 October 2017.

A serious concern has been that State Authorities (Army, Police and Security Services) acted in collusion with paramilitaries to bring about a number of killings in Northern Ireland including that of Mr Finucane. A number of reports have considered this.

1)  A Review was conducted by Sir Desmond de Silva QC and reported in 2012 - see previous post.

2)  A report by former Canadian Supreme Court Justice Peter de Carteret Cory stated that there was "strong evidence" that collusive acts were committed by the Army, the RUC and the Security Service and that there was a need for a public inquiry - see para 1.293 of  Cory - Collusion Report 2004

3)  There were also reports by John Stevens (now Baron Stevens of Kirkwhelpington).   Stevens stated in Overview and recommendations 17th April 2003:

I conclude there was collusion in both murders and the circumstances surrounding them. Collusion is evidenced in many ways. This ranges from the wilful failure to keep records, the absence of accountability, the withholding of intelligence and evidence, through to the extreme of agents being involved in murder."
Posted by ObiterJ at Tuesday, August 08, 2017