What is Litter? An interesting question. 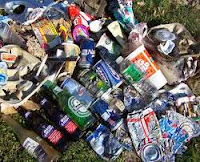 Litter is a menace.  Many places are littered with discarded materials.  It is unsightly; can result in unhygienic conditions and costs are incurred in cleaning it up.  The Environmental Protection Act 1990 section 87 provides for an offence of leaving litter.

Section 87(1) states - A person is guilty of an offence if he throws down, drops or otherwise deposits any litter in any place to which this section applies and leaves it.

The offence may be committed in any place in the area of a principal litter authority which is open to the air.   The offence may also be committed in certain covered places provided the place is open to the air on at least one side AND the public has access to it, with or without payment.  A further point is that it is immaterial whether the litter is deposited on land or in water.

There are some situations where an offence would not be committed.  On this, see section 87(4A).

The offence is triable summarily (i.e. in the Magistrates' Court) and, upon conviction, the maximum punishment is a level 4 fine (£2500).  The surcharge would be added to that and, possibly, costs.

The Daily Mail 25th September - published the story of two men who have been convicted at Thames Magistrates Court of the offence for spitting in a public place.

The Daily Mail commences by saying:  'Yobs who spit in public can now be prosecuted for littering after a council won a landmark legal ruling.  In a test case, two men failed in their challenge of a local authority policy to impose £80 on-the-spot fines on them.  Magistrates upheld the council’s decision that spitting could be prosecuted under anti-litter legislation – giving a green light for other councils to follow suit.'

The decision of a Magistrates' Court is NOT a landmark legal ruling.  In fact, it is very arguable that the challenge to the local authority policy ought to have succeeded on the basis that 'spit' should not have been held to be 'litter.'

The Act does not exhaustively define the word 'litter' which is an ordinary word of the English language.  There is nothing in the Act to suggest that 'litter' is to be given some other special meaning - Brutus v Cozens [1973] AC  854,  [1972] UKHL 6.   However, there is a partial definition in section 98(5A) -

(5A)  “Litter” includes - (a) the discarded ends of cigarettes, cigars and like products, and (b) discarded chewing-gum and the discarded remains of other products designed for chewing.

The items listed in 5A would appear to be within the ordinary meaning of 'litter'.  The partial definition is, of course, aimed at removing any doubt which there might have been as to those items of commonplace litter.   5A was inserted into the Environmental Protection Act 1990 by section 27 of the Clean Neighbourhoods and Environment Act 2005 and the explanatory notes to the 2005 Act state that 5A was inserted to clarify the meaning of litter for practitioners.  .

The government's view as to what constitutes litter is in the Code of Practice on Litter and Refuse  at Part 1 Para 5.0.

The meaning of 'litter' was considered by the High Court in Westminster City Council v Riding (1995) 94 LGR 489 - a case under the Environmental Protection Act 1976 - where it was held that commercial waste bagged for collection can be litter but is not necessarily so.


The Mail's article gives a further indication that the law does not extend to spitting.

Moves to tackle spitting have won support from ministers. Local Government minister Brandon Lewis said: ‘Spitting is a deeply anti-social and unpleasant practice.  ‘Spitting on Britain’s streets should be as socially unacceptable as dropping litter.’

Communities Secretary Eric Pickles has backed Enfield Council who want to pass a byelaw banning the habit, saying: ‘Spitting on Britain’s streets is not socially acceptable.’

Most right thinking people would probably support a byelaw specifically aimed at spitting.  However, criminal convictions should be based on conduct which is clearly prohibited.  Section 87 is not so clear.

It may be of relevance to this question that the Act makes provision for fixed penalties (section 88).   Fixed penalty notices can be issued where an authorised officer of a litter authority finds a person who he has reason to believe has on that occasion committed an offence under section 87.

As far as I am aware, the point is undecided.  Views on this are particularly welcome.