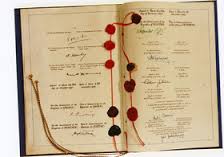 “Human rights are inscribed in the hearts of people; they were there long before lawmakers drafted their first proclamation. Mary Robinson, Former United Nations High Commissioner for Human Rights

Following on from yesterday's 60th birthday of the European Convention on Human Rights, I came across an excellent article published by the British Institute of Human Rights (BIHR)'s Act for UK Rights blog.  It is by Paul Langton who is the winner of the BIHR's competition celebrating 60 years of the Convention.  Articles, not exceeding 750 words, were invited on why the Convention has been valuable in the UK and what it means to the writer.

As I understand it, Mr Langton is not a lawyer and, in any event, it is often said (with much truth) that law is too serious to be left entirely to lawyers.  This is particularly so on a subject such as human rights which are meaningless unless they belong to everyone.  Mr Langton's article is certainly my 'pick of the day'.

Why I'm celebrating the other Jubilee: 60 years of the European Convention on Human Rights


September 3rd 2013 should be welcomed as cause for celebration. It is incredible that today the European Convention has expanded to serve 47 countries and 800 million citizens. It is a people’s charter that enshrines in law the freedoms and rights to be enjoyed by everybody. It is this Convention that acknowledges Europe’s dark history and binds together its member states in a unity that could not be duplicated by trade agreements or diplomats. Critics call for “British laws for British people”. But the Convention is more than a set of laws. It is part of a British legacy and a collective conscience that encompasses the highest values of humanity. It is a tremendous achievement that we should not so readily turn our backs on.

The government's proposals for Transforming legal aid are still with us even if during the summer things have gone quieter.  The government has, so far, given little ground in the face of well argued criticism of their proposals from many quarters - see blog of 4th June.  One concession was that defendants would have some degree of choice of lawyer in the proposed Price Competitive Tendering regime.  Precisely what degree of choice remains to be seen.

Retired Lord Justice of Appeal Sir Stephen Sedley comments about the government's proposals on Judicial review and legal aid in his critique of a book by Martin Loughlin - 'The British Constitution: A very short introduction'.  The critique is on London Review of Books - Beware Kite-Flyers.  This article is also worth reading for Sir Stephen's views about the reforms (in the Constitutional Reform Act 2005) to the Lord Chancellor's role.

The debate may now be read via the Parliament website HERE and it may be watched HERE.

The Guardian 4th September - Government may back down on legal aid reforms.