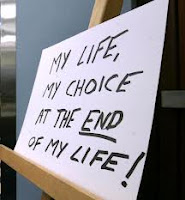 On 31st July the Court of Appeal (Civil Division) gave its judgment in three cases all concerning the offence of Assisting Suicide - Suicide Act 1961 s.2 as amended by the Coroners and Justice Act 2009.  The three cases raised various points which were addressed by the court in a single judgment.  The court comprised Lord Judge CJ; Lord Dyson MR and Elias LJ.  This was Lord Judge's final judgment in his capacity as Lord Chief Justice.  R (Nicklinson and Lamb) v Ministry of Justice [2013] EWCA Civ 96.

In short, the decision was that (1) a defence of necessity cannot be fashioned at common law as a means of protecting a person who assists in the suicide of another; (2) the legal prohibition against assisting was not a disproportionate interference with Article 8 rights but (3) the Director of Public Prosecution's policy relating to prosecutions under section 2 required some amendment to provide greater clarity as to when certain individuals might be prosecuted.  That would enable individuals to have greater foreseeability of the consequences of assisting.  Point 3 will be of particular importance to the medical profession.  Lord Judge dissented on point 3 - ' ...we cannot keep ordering and re-ordering the DPP to issue fresh guidelines to cover each new situation... [para 179]

At the time of writing, it seems very likely that this case will proceed to the Supreme Court.  At the heart of the judgment lies the fact that the Suicide Act 1961 is a clear prohibition against assistance in suicide decided by Parliament and set in legislation though prosecutions may only be brought with the consent of the DPP who applies the guidance arrived at following the House of Lords decision in Purdy.  Parliament has, so far, not acted to amend the law and as recently as 2009 can be taken to have affirmed it when section 2 was amended by the Coroners and Justice Act.  There are very difficult moral judgments at play and it was for Parliament to act as what Lord Judge referred to as 'the conscience of the nation.'  At para 155 he said:

The circumstances in which life may be deliberately ended before it has completed its natural course, and if so in what circumstances, and by whom, raises profoundly sensitive questions about the nature of our society, and its values and standards, on which passionate but contradictory opinions are held. Addressing these life and death issues in relation to life before birth, the circumstances in which a pregnancy may be terminated were decided by Parliament. The abolition of the death penalty following the conviction for murder was, similarly, decided by Parliament. For these purposes Parliament represents the conscience of the nation. Judges, however eminent, do not: our responsibility is to discover the relevant legal principles, and apply the law as we find it. We cannot suspend or dispense with primary legislation. In our constitutional arrangements such powers do not exist. They are not vested in any one or any body. Parliament itself cannot suspend or dispense with primary legislation. It may enact new provisions amending the law. When it does so, the change follows as a result of fresh legislative enactment which, far from suspending or dispensing with the law, confirms that a suspending or dispensing power is a stranger to our constitution.

The issues with which these appeals are concerned have been addressed in Parliament on a regular basis over many years without producing the result sought by those who advocate change. The legislation which criminalises assisting suicide is recent and unequivocal. Even if (which it is not) it were constitutionally permissible for judges to intervene on the basis that Parliament had failed to address a desperately urgent social need, it cannot be said that Parliament has ignored these issues. Therefore whatever the personal views of any individual judge on these delicate and sensitive subjects, and I suspect that the personal views of individual judges would be as contradictory as those held by any other group of people, the constitutional imperative is that, however subtle and impressive the arguments to the contrary may be, we cannot effect the changes or disapply the present statutory provisions, not because we are abdicating our responsibility, but precisely because we are fulfilling our proper constitutional role.

The full judgment may be read at R (Nicklinson and Lamb) v Ministry of Justice [2013] EWCA Civ 96.  The judgment extends to 188 detailed paragraphs and will require fuller analysis at a later date.

This post also looked at an interesting speech by Lord Walker of Gestingthorpe delivered in Australia - Developing the common law: how far is too far?   Note: Lord Walker retired from the Supreme Court in March 2013.

Questions of human mortality - 13th May 2013 - the case of Mr Paul Lamb and the argument that there should be a defence of necessity.