The path to censorship of the media 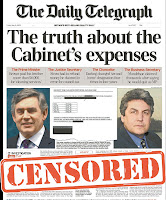 Update 2 ~ The Royal Charter on Self Regulation of the Press

The goal must be a genuinely independent and effective self regulatory system. I have therefore set out, and recommend a model for independent self regulation that I am confident would protect both the freedom of the press and freedom of speech along with the rights and interests of individuals; it should therefore command public confidence."

Dominic Sandbrook, writing in the Daily Mail 17th March, presents a powerful argument against media regulation - For centuries men and women fought and died for freedom of expression.  Who are Miliband and Clegg to throw it away?  Sandbrook argues that many matters of enormous public concern would not have received publicity if media regulation had been in place - e.g. The Daily Mail naming those it considered guilty of the Stephen Lawrence murder, the expenses scandal in Parliament, revelations about corrupt police officer Dizaei, Huhne's speeding points etc.

It seems true
to say that the argument against media regulation is now lost.  More is the pity!  However, the precise detail of the regulation remains to be seen.  At the time of writing, it appears that there might even be a Royal Charter PLUS legislation - see The Guardian - Press Regulation deal: the key points.  Lord  Justice Leveson's proposal was for statutory underpinning of the regulator.  The matter is to be debated in the House of Commons. It will be interesting to see just how many elected members oppose regulation.

The Telegraph 18th March - Leveson deal reached on press regulation, claims Labour - David Cameron has agreed to create a new press regulator set up under a Royal Charter and "a bit of statute", Labour said today.

Iain Martin has written a powerful blog opposing the royal charter deal at the Telegraph. Here's an extract.


To understand how far we've sunk already, try imagining hearing the following headline from the US: "The White House and Congressional leaders have announced that they are close to agreeing a deal on press regulation." This simply would not happen; it would not compute with most Americans; they would find it baffling, and not remotely a question of Left or Right. For a Democrat or a Republican, it would come down to free expression.

Mark Elliott, a law lecturer at Cambridge, has written a learned post at the Public law for everyone blog on the royal charter mechanism proposed by David Cameron.  Elliott says that the proposals do not amount to statutory underpinning in the sense envisaged by Lord Leveson.

Richard Edwards - Bristol - Leveson's legacy: the licensing of blogs and twitter?   Of course, bloggers were not the culprits behind the phone hacking and other press wrong-doing that led to Leveson. Indeed, Leveson failed to properly discuss electronic media. But this has not prevented our politicians from seizing the opportunity to regulate blogging with regulatory changes that are more at home in Beijing than Britain.

Update 2 - Royal Charter on Self-Regulation of the Press

The DRAFT text of the charter has been published

The Guardian 19th March - Press regulation: newspapers bridle at 'historic' deal - there is particular concern over the question of 'exemplary' damages.  Amendments to the Crime and Courts Bill are aimed at granting a power to award these damages - see Bill amendments.


To move the following Clause: -

(a) the defendant’s conduct has shown a deliberate or reckless disregard of an outrageous nature for the claimant’s rights,
(b) the conduct is such that the court should punish the defendant for it, and
(c) other remedies would not be adequate to punish that conduct.
(6) Exemplary damages may be awarded under this section whether or not another
remedy is granted.
(7) The decision on the question of -

(a) whether exemplary damages are to be awarded under this section, or
(b) the amount of such damages,
must not be left to a jury.’

This is a draconian provision in a fee society and is likely to be a powerful deterrent to the publication of anything which might be seen, at the time of the publication, as running any risk of the exemplary damages provision being applied.   These provisions will heavily engage the European Convention on Human Rights (Art 10|) and they are intended to be a remedy for use only where other remedies are inadequate but it will be a brave newspaper which opts to be the first to test these provisions in the courts.  For example, what does 'outrageous nature' mean? - when should a court punish the defendant? etc.

An amendment to the Enterprise and Regulatory Reform Bill has been put forward by Lord Stevenson of Balmacara.  The amendment may be seen in the Fifth Marshalled list of amendments.  It states:

Where a body is established by Royal Charter after 1 March 2013 with functions relating to the carrying on of an industry, no recommendation may be made to Her Majesty in Council to amend the body’s Charter or dissolve the body unless any requirements included in the Charter on the date it is granted for Parliament to approve the amendment or dissolution have been met.”

The draft Press Charter (at 9.2) states:
Before any proposal (made by any person) to add to, supplement, vary or omit (in whole or in part)
a provision of this Charter (“proposed change”) can take effect a draft of the proposed change must have been laid before Parliament, and approved by a resolution of each House. For this purpose “approved” means that at least two-thirds of the members of the House in question who vote on the motion do so in support of it.

The amendment to the Bill offers some underpinning of the 2/3 majority but nothing will prevent Parliament legislating for anything it wishes - (see Of Interest to Lawyers blog).  Note also, it is only a 2/3 majority of those who actually bother to vote!

In a further article, The Guardian looks at whether bloggers will be affected by the regime - Bloggers may face libel fines under press regulation deal

The Guardian 19th March - Press regulation: a victory for the rich, the celebrated and the powerful

This new press regulator is all about revenge, not justice. It's hard to imagine a more chilling deterrent to serious investigation.


The Guardian 19th March - Press regulation: publishers may have grounds for legal challenge - Newspapers likely to take action over regulations that will require huge payouts when stories are wrong