Rights and Justice at bay 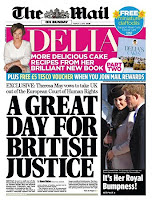 The Mail on Sunday (3rd March) was thrilled to announce that Theresa May vows to take UK out of the European Court of Human Rights.  The newspaper claimed that this marked a triumph for their campaign 'against the ludicrous abuses of justice carried out in the name of human rights.'  This move would mean 'foreign courts could no longer meddle in British justice.'  It seems that this may become a Conservative Party manifesto promise to be implemented if the Conservatives win an overall majority.  Of course, politics are at play here given the UK Independent Party's appeal in the recent Eastleigh by-election - actually won by the Liberal Democrat candidate.

Withdrawal from the European Court of Human Rights is not an option without withdrawal from the European Convention on Human Rights and, almost certainly, the 47 member Council of Europe (which the UK helped to form).  Such a move would be very likely to send out an alarming message that the United Kingdom has turned its back on the international human rights movement.  That would damage the UK's standing in the world.


The other European body is the European Union (EU) which is currently working towards becoming a signatory to the European Convention on Human Rights.  This would build the Convention even more firmly into the law of the EU than at present even though the Court of Justice of the EU already takes the convention into account.  Of course, David Cameron has promised a referendum on the UK's membership of the EU should he win the next election but he has already said that, depending on the membership terms, he will campaign to remain a member.

This move is just the latest of several attacks on the idea of justice for the British people.  Other attacks include:


These matters have been discussed on this and other blogs. We are living in difficult but interesting times.  Unfortunately, we are also witnessing a worrying diminution of access to justice and respect by government for the rights of the people.

Dr Mark Elliott - Repealing the Human Rights Act; withdrawing from the ECHR: be careful what you wish for

Conor Gearty - The Guardian 4th March - Theresa May's human rights stunt - 'The struggle against human rights is a Tory fixation, not a British one (and much less a UK one).'

Judicial review - Cut the crap: we are at economic war (19th November 2012) and Consultation (Ministry of Justice)