The UKSC ~ a course and an article 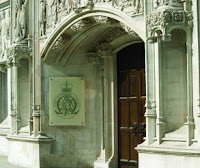 This post looks at a course, to be run online and starting in February. The course will examine role and inner workings of the UK Supreme Court. The post then considers a recent critical article by Professor Conor Gearty which analyses the approach taken by the UKSC in some of its recent cases. Finally, there are some observations arising from the article.  First, a little background.

civil and criminal cases from England, Wales, and Northern Ireland. The UKSC replaced the appellate committee of the House of Lords which handed down its final judgment in July 2009 - (the Purdy case)..

For Scotland, the UKSC is the final appellate court in civil matters only. Scotland's highest court in criminal matters is the High Court of Justiciary based in Edinburgh.

The UKSC is based in Parliament Square, Westminster and commenced sitting in 2009.

The UKSC's President is Lord Reed of Allermuir.  He is the fourth President: the previous being Lord Phillips of Worth Matravers, Lord Neuberger of Abbotsbury, and Lady Hale of Richmond.

Biographical details of the Justices are published on the court's website.

The Judicial Committee of the Privy Council is a separate court although it shares the same premises as the UKSC and Justices of the Supreme Court (JSC) form the majority of the judges hearing privy council cases.

The UKSC is particularly notable for televising its hearings and for prompt publication of judgments together with explanatory Press Summaries. The court also maintains a YOUTUBE channel.

Those wishing to explore the role and inner workings of the Supreme Court are invited to enrol for a FREE short ONLINE course which will last 2 weeks and involves 8 hours of learning. This is a Royal Holloway course produced in collaboration with the Supreme Court. The course will commence on 21 February 2022 - .

An interesting and somewhat challenging article by Professor Conor Gearty (London School of Economics Law School ) has been published by London Review of Books. The article discusses the Supreme Court under its current President, Lord Reed.
Conor Gearty · In the Shallow End
No punches are pulled regarding the present-day atmosphere in which the court is operating.  Gearty sees the UKSC as operating in a "malign political atmosphere" but he also cautions against any assumption that the lines the court has sometimes taken under Lord Reed is in response (conscious or subconscious) to government pressure.  "It is entirely possible – indeed probable – that the change in direction is primarily driven by the judicial philosophy espoused by Reed and his colleagues, and would have happened even if the court (and the system of the rule of law over which it presides) were not being threatened."
Gearty also addresses any lazy view that appellate courts are always on the side of those in power. This is manifestly not the case and several examples are mentioned where the UKSC has gone against what one might suppose the government wanted - e.g. DPP v Ziegler [2021] UKSC 23 (the Arms Fair protest case). The most prominent example of the court deciding against the wishes of the executive was Miller 2 where the purported prorogation of Parliament was ruled unlawful. The court was unanimous.
Bearing in mind those caveats, the main thrust of the article is that the UKSC appears generally to have adopted "an approach rooted in legal formalism, an extremely narrow reading of the rule of law, while displaying the old-school lack of interest in the lived experiences of those who plights have brought them to the judges' attention." The article offers several instances where Gearty claims that the court adopted such an approach - e.g. the Shamima Begum case, and the tax credits case of - R (on the application of SC, CB and 8 children) (Appellants) v Secretary of State for Work and Pensions and others (Respondents)
Plainly, opinion on this will vary but the article offers trenchant criticism of some of the cases decided in recent times by the court.
*** OBSERVATIONS ***
Malign political atmosphere?
The phrase "malign political atmosphere" can be supported by a considerable amount of evidence  including the reaction of politicians to UKSC's unanimous decision in the Miller 2 case concerning the prorogation of Parliament in 2019.  Prime Minister Johnson did not offer the court a written statement which could have explained his reasons for advising HM The Queen to prorogue Parliament. The government is now taking legislation through Parliament to reverse the decision and to prevent judicial review of any future prorogation decisions.
Previous post - Dissolution and Calling of Parliament Bill
Further evidence of the government's attitude can be seen in the consultation on reforming human rights protection in the UK. An independent review of the operation of the Human Rights Act 1998 was given rather limited terms of reference but nonetheless produced a well-considered report. Some reforms were recommended but, overall, the Act was thought to work well.
My posts on the Independent Review start HERE
The government responded with a consultation putting forward some major reforms including a permission stage for any judicial reviews based on human rights grounds.  In some other areas the consultation fails to put forward actual reform proposals but invites those responding to suggest reforms to meet the government's objectives! The whole tenor of the consultation is that the government wishes to limit human rights challenges to executive decision-making. Such challenges are already difficult but will become more so if the government has its way.
My posts on the Consultation start HERE
Still more evidence can be seen in the Police, Crime, Sentencing and Courts Bill by which the government seeks to place huge restrictions of freedom to protest. It will be almost impossible to protest about even the most egregious subject without breaking the criminal law.
I wrote about the late-in-the-day amendments to this Bill HERE.
Attempting to ban protest is usually the mark of a repressive state. That’s not us, is it? | Will Hutton | The Guardian
There can be little doubt that the present government is seeking enhancement of executive power and that will be at the expense of both Parliament (already strongly managed by the executive) and the Judiciary (by weakening judicial review). There is a new authoritarianism in the air.
The phrase - the Reed Court:
References to "the Reed court" seem, at least to me, to be taken from various commentaries about the Supreme Court of the United States (SCOTUS).  Although the point is open to serious debate, it has appeared that some Chief Justices have dominated the court. SCOTUS has a very different jurisdiction to the UKSC and so the word "Supreme" can be misleading. SCOTUS has a power to decide that even an Act of Congress is unconstitutional and such Acts can be "struck down." The UKSC has no such power in relation to Acts of Parliament which constitute the ultimate law in the UK. Whether this concept of Parliamentary Sovereignty either has or should have any limits is likely to become a matter of intense debate.
Previous post --- Law and Lawyers: UK constitutional arrangements - the legislative power of Parliament (obiterj.blogspot.com)
The UKSC comprises strong-minded justices who appear to be unlikely to allow themselves to be dominated by the court's President. Individual justices are entitled to dissent if they consider that is the right course. (They may also do that in the USA).  Lord Reed himself gave a notable dissent in the Miller 1 case - (on whether an Act of Parliament was required to permit the Prime Minister to commence the formal process for the UK leaving the EU). Lord Reed (together with Lords Carnwath and Hughes) was of the view that no such Act was required but the majority thought otherwise.
25 January 2022
Posted by ObiterJ at Tuesday, January 25, 2022