The Good Friday Agreement (GFA) of 1998 was a major achievement and brought an end to 30 years of terrible violence - referred to as "The Troubles" - BBC History.  No sensible individual would wish to see a return to those dark days during which some 3600 people were killed and thousands more injured.

The GFA contained various "strands" each of which has to be taken as a vital component of the peace settlement.  Strand 1 related to Democratic Institutions - "This agreement provides for a democratically elected Assembly in Northern Ireland which is inclusive in its membership, capable of exercising executive and legislative authority, and subject to safeguards to protect the rights and interests of all sides of the community."  This Strand also provided for - "Executive authority to be discharged on behalf of the Assembly by a First Minister and Deputy First Minister and up to ten Ministers with Departmental responsibilities."

There was a return to a representative Northern Ireland Assembly but this has been suspended since early 2017 following a breakdown of power sharing arrangements.  The breakdown occurred over the so-called "Cash for Ash" affair which is now the subject of the Renewable Heat Incentive public inquiry.  Efforts to re-establish the Assembly have, so far, been unsuccessful.  For an update as at 6 September 2018 see HERE.

The breakdown in power-sharing has led to some important legislation by the UK Parliament.  To date we can note: 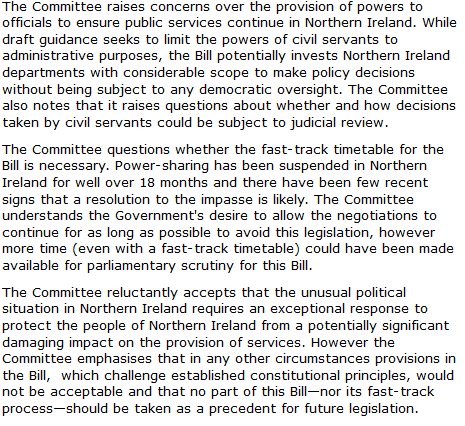 The Bill is considered in some detail by Stephen Tierney at UK Constitutional Law Blog* - Governing Northern Ireland without an Executive: Quick fix of Constitutional Minefield?

Mr Denis Hutchings (age 77), a former soldier who served in Northern Ireland, is facing trial for  attempted murder, in 1974, of John Pat Cunningham and also for attempted grievous bodily harm -  BBC News 10 May 2018.  Mr Hutchings applied to stay the proceedings against him on three grounds; alleged non-availability of evidence, a delay in the case and a claim of a breach of a promise that he would not be prosecuted for the incident.  He denies charges of attempted murder and attempting to cause grievous bodily harm.  He argues that it was never his intention to kill or injure Mr Cunningham, but that he was firing warning shots to get him to stop.  The decision of Mr Justice Colton refusing the application to stay proceedings is at R v Hutchings (Denis) [2018] NICC 5.

Another judicial review decision was handed down in December 2017 - see [2017] NIQB 121.  Mr Hutchings challenged the decision of the DPP of Northern Ireland to order a non jury trial but the decision was upheld.  In July 2018 the Supreme Court granted permission for an appeal.

The non jury trial system often referred to as "Diplock Courts" were a form of non-jury trial for individuals charged with certain "scheduled offences".  They were introduced into Northern Ireland in 1973 following a report by Lord Diplock but, in 2007,  they were replaced by a new form of non-jury trial under the Justice and Security (Northern Ireland) Act 2007.  The use of such courts is intended to be a temporary arrangement - see this consultation - but they are with us until at least 31st July 2019  having been extended by the Justice and Security (Northern Ireland) Act 2007 (Extension of Duration of Non Jury Trial Provisions) Order 2017.  The arguments for the latest extension are set out in this debate - Hansard House of Lords 18 July 2017


The prosecution of Mr Hutchings stands in contrast to the treatment of many convicted individuals who were released from prison under the terms of the 1998 Good Friday Agreement in which it was stated that - "Both Governments will put in place mechanisms to provide for an accelerated programme for the release of prisoners, including transferred prisoners, convicted of scheduled offences in Northern Ireland or, in the case of those sentenced outside Northern Ireland, similar offences (referred to hereafter as qualifying prisoners). Any such arrangements will protect the rights of individual prisoners under national and international law."

There is certainly anger over the pursuit in this way of ex-service personnel - e.g. Express 12 May 2018 - but a contrasting opinion by Kieran McEvoy (Queen's University Law) is at The Guardian 11 May 2018.  The case may also be viewed alongside the fact that "letters of assurance" were issued to so-called "on the runs" who will not now face prosecution -  Law and Lawyers 26 February 2014

Finally, judgment of the Supreme Court is awaited in Geraldine Finucane's application.  Mrs Finucane is seeking a public inquiry into the circumstances surrounding her husband's death in 1989 - Law and Lawyers 26 June 2018.  The Supreme Court heard the appeal in June 2018.