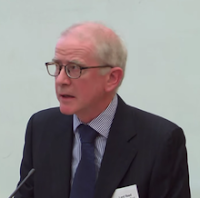 Lord Reed will become Deputy President of the Supreme Court with effect from 6th June when Lord Mance, the existing Deputy, retires - No. 10 Downing Street 29th May and Supreme Court announcement.

Lord Reed became a Justice of The Supreme Court in February 2012.  After studying law at the universities of Edinburgh and Oxford, Lord Reed was admitted to the Faculty of Advocates in 1983, where he undertook a wide range of civil work. He served as a senior judge in Scotland for 13 years, being appointed to the Outer House of the Court of Session in 1998 and promoted to the Inner House in January 2008. He has sat as an ad hoc judge of the European Court of Human Rights.  Lord Reed is one of the two Scottish Justices of The Supreme Court.

The retirement of Lord Mance will mean that only two former "Lords of Appeal in Ordinary"  remain in the Supreme Court - Lady Hale and Lord Kerr.  The Lords of Appeal in Ordinary were those appointed to sit in the Appellate Committee of the House of Lords before the creation of the Supreme Court in October 2009.  The very last judgment of the House of Lords was in R (Purdy) v Director of Public Prosecutions [2009] UKHL 45; [2009] EWCA Civ 92.

Biographies of the Justices.

Lord Reed has been a member of the Supreme Court in numerous cases.  My search on Bailii revealed 250 cases.  It is worth recalling two.

In the Miller/Dos Santos "Brexit-related" litigation - [2017] UKSC 5, Lord Reed gave a dissenting judgment at para 153 onwards.   The Divisional Court of England and Wales (Lord Thomas LCJ, Sir Terence Etherton MR and Sales LJ), declared that the Secretary of State did not have power to give Notice under Article 50 of the Treaty on European Union, without Parliament’s prior authority. The Secretary of State appealed to the Supreme Court against this decision.  The Supreme Court by a majority of 8 to 3 dismissed the Secretary of State’s appeal.  The outcome was that the European Union (Notification of Withdrawal) Act 2017 was enacted.

Lord Reed, with whom Lord Carnwath and Lord Hughes agreed, considered that the effect which Parliament has given to EU law under the European Communities Act 1972 was inherently conditional on the application of the EU treaties to the UK and therefore on the UK’s membership of the EU. The ECA did not impose any requirement or manifest any intention in respect of the UK’s membership of the EU. It did not therefore affect the Crown’s exercise of prerogative powers in respect of UK membership

The other judgment, described by an article in the Law Society Gazette as "brutal and elegant", is R (Unison) v Lord Chancellor [2017] UKSC 51.  The issue in the appeal was whether fees imposed by the Lord Chancellor in respect of proceedings in employment tribunals (“ETs”) and the employment appeal tribunal (“EAT”) were unlawful because of their effects on access to justice.  The court held that the Fees Order was unlawful under both domestic and EU law.


66.             The constitutional right of access to the courts is inherent in the rule of law. The importance of the rule of law is not always understood. Indications of a lack of understanding include the assumption that the administration of justice is merely a public service like any other, that courts and tribunals are providers of services to the “users” who appear before them, and that the provision of those services is of value only to the users themselves and to those who are remunerated for their participation in the proceedings ......

67.             It may be helpful to begin by explaining briefly the importance of the rule of law, and the role of access to the courts in maintaining the rule of law. It may also be helpful to explain why the idea that bringing a claim before a court or a tribunal is a purely private activity, and the related idea that such claims provide no broader social benefit, are demonstrably untenable.

68.             At the heart of the concept of the rule of law is the idea that society is governed by law. Parliament exists primarily in order to make laws for society in this country. Democratic procedures exist primarily in order to ensure that the Parliament which makes those laws includes Members of Parliament who are chosen by the people of this country and are accountable to them. Courts exist in order to ensure that the laws made by Parliament, and the common law created by the courts themselves, are applied and enforced. That role includes ensuring that the executive branch of government carries out its functions in accordance with the law. In order for the courts to perform that role, people must in principle have unimpeded access to them. Without such access, laws are liable to become a dead letter, the work done by Parliament may be rendered nugatory, and the democratic election of Members of Parliament may become a meaningless charade. That is why the courts do not merely provide a public service like any other.