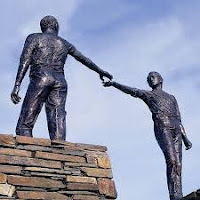 A)  Here is a brief "catch up" on matters relating to a few older posts.

1.  The Edlington (S. Yorkshire) brothers have been granted indefinite anonymity - BBC News 9th December and previous post.   The brothers were sentenced to indeterminate detention for offences against three others.  The offences included causing grievous bodily harm, robbery and causing or inciting a child under the age of 13 to engage in sexual activity.  In 2012 a Review by Lord Carlile QC of the Edlington case was published - see the report

2.  The Scottish High Court of Justiciary has rejected an application for "Criminal Letters" brought by relatives of those killed in Glasgow when, in December 2014, a bin lorry went out of control - BBC News 9th December
In Scotland, Criminal Letters are required to bring a private prosecution.  The court's judgment is here.  Previous post of 28th January 2016.


3.  The Police Service of Northern Ireland has issued a "clarification" of its position regarding so-called "legacy investigations."  The statement notes that between 1 January, 1969 and 1 March, 2004, there were more than 3,200 homicides in Northern Ireland. The review of all these cases and, where investigative opportunities are identified, the further investigation of them , is the responsibility of the PSNI’s Legacy Investigation Branch.   The clarification states that - "There is no new single probe or bespoke inquiry into deaths attributed to the British Army.   All Troubles related deaths will be reviewed by LIB using the Case Sequencing Model which does not prioritise military cases. This is not a new decision.  If there is a political decision to establish a Historical Inquiries Unit, LIB’s responsibilities will pass to it.

The investigation of "deaths attributed to the British Army" is a highly sensitive matter given the stance toward certain offences alleged to have been committed by Northern Ireland paramilitaries.  See previous post - 26th February 2014

B]  Sergeant Blackman is the Royal Marine convicted of murder by the Court Martial.  His case was referred to the Criminal Cases Review Commission which has referred it back to the Court Martial Appeal Court - see the CCRC Statement of 6th December.   Previous post 17th September 2015

C]  For an interesting report about recent legal matters see the ICLR Weekly Notes 12th December where some superb - and more light-hearted - material from Isobel Williams about the Brexit case is included.