Broadcasting the Court of Appeal

Sky News will be broadcasting proceedings from inside the Court of Appeal from 10.30am - watch coverage on Sky 501, Virgin Media 602, Freesat 202, Freeview 82, Skynews.com and Sky News for iPad.

Contrary
to what has been stated in some media reports, the Criminal Justice Act 1925 section 41 and the Contempt of Court Act 1981 section 9 remain in force.  What the Crime and Courts Act has done is to enable the Lord Chancellor (with the concurrence of the Lord Chief Justice) to make an Order disapplying those sections in certain  circumstances.   The court retains a right to reapply any disapplied provision in the interests of justice or in order that a person is not unduly prejudiced.

Ministry of Justice May 2012 - Proposals to allow the broadcasting, filming, and recording of selected court proceedings

This is a welcome development enabling the public to view proceedings in some of the most important cases before the courts.  Court of Appeal proceedings generally involve legal argument and the judges deliver their judgments on the law.  Witnesses are very much the exception rather than the rule.

Ministry of Justice 'poster' - in the bottom right hand image, there is a reference to the Supreme Court having allowed broadcasting since the court was created.  However, the image depicts the Court of Appeal. Slightly unfortunate but I don't think it detracts too much from the poster's message. 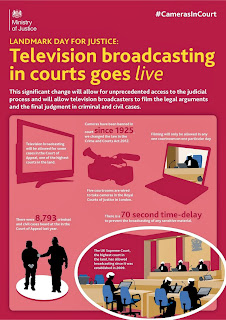