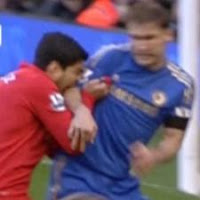 This morning, the major talking point in the Barclay's Premier League is the incident between Luis Suárez and Branislav Ivanovic at the Liverpool v Chelsea match at Anfield on 21st April - Telegraph 22nd April - where it is reported that Luis Suárez held an opponent and then bit him.  Suarez tweeted an apology for what he described as “inexcusable behaviour”.

Clearly, Liverpool Football Club will be entitled to discipline Suarez and so will the Football Association and here is a player with a problematic disciplinary record.  Leaving such action aside, what does the criminal law say about what might appear to be an assault by one player on another?  The principal modern case is R v Barnes [2004] EWCA Crim 3246 - Lord Woolf CJ, Cresswell and Simon JJ.

The prosecution of Mr Barnes was
under under section 20 of the Offences against the Person Act 1861.  It arose out of a serious leg injury sustained by the victim during the course of an amateur football match in December 2002. The prosecution contended that it was the result of a "crushing tackle, which was late, unnecessary, reckless and high up the legs". The appellant admitted the tackle but claimed that it was a fair, if hard, challenge, in the form of a sliding tackle in the course of play, and that any injury caused was accidental. It was not disputed that the victim's injury was the result of the tackle and that the injury to his right leg amounted to grievous bodily harm.

Obviously, in contact sports there is risk of injury.  Participants are said to impliedly consent to that contact inherent in the usual course of a game but the question arises as to when form of contact is such that the intervention of the criminal law is appropriate.  Lord Woolf set out the position at paras. 4 to 16 of the judgment.  The following is a summary only:

1. The existence of disciplinary procedures has the effect that, in the majority of situations, there is no need for criminal proceedings and such proceedings are undesirable.   A criminal prosecution should be reserved for those situations where the conduct is sufficiently grave to be properly categorised as criminal.

4. To this general rule, there are obvious exceptions such as patients consenting to surgery.  Another exception is physical injury in the course of contact sports such as football or boxing.

5. The House of Lords considered the law in R v Brown [1994] 1 A.C. 212.   Brown dealt with a very different factual context, namely sado-masochistic activities between consenting adults.  However, their Lordships made it clear that the rule and the exceptions to the rule that a person cannot consent to his being caused actual harm, are based on public policy.

6. Another interesting case illustrating this public policy approach was  R v Dica [2004] Q.B. 1257 - consent to sexual intercourse with HIV positive man when woman knew of his condition - there would be a defence to a charge under section 20.

8. The fact that the participants in, for example, a football match, implicitly consent to take part in a game, assists in identifying the limits of the defence.  If what occurs goes beyond what a player can reasonably be regarded as having accepted by taking part in the sport, this indicates that the conduct will not be covered by the defence.   What is implicitly accepted in one sport will not necessarily be covered by the defence in another sport.

9. The court looked at Canadian authority - R v Cey (1989) 48 C.C.C. (3d) 480 - Saskatchewan Court of Appeal- and also considered the views of the Law Commission - "Consent and offences against the person: Law Commission Consultation Paper No. 134."

The court approved an approach adopted by the then Criminal Injuries Compensation Board - "in a sport in which bodily contact is a commonplace part of the game, the players consent to such contact even if, through unfortunate accident, injury, perhaps of a serious nature, may result. However, such players do not consent to being deliberately punched or kicked and such actions constitute an assault for which the Board would award compensation."

In general, the court accepted the Law Commission's view that:


"the present broad rules for sports and games appear to be :


(i) the intentional infliction of injury enjoys no immunity;

(ii) a decision as to whether the reckless infliction of injury is criminal is likely to be strongly influenced by whether the injury occurred during actual play, or in a moment of temper or over-excitement when play has ceased, or "off the ball";

(iii) although there is little authority on the point, principle demands that even during play injury that results from risk-taking by a player that is unreasonable, in the light of the conduct necessary to play the game properly, should also be criminal."

10. The fact that the play is within the rules and practice of the game and does not go beyond it, will be a firm indication that what has happened is not criminal. In making a judgment as to whether conduct is criminal or not, it has to be borne in mind that, in highly competitive sports, conduct outside the rules can be expected to occur in the heat of the moment, and even if the conduct justifies not only being penalised but also a warning or even a sending off, it still may not reach the threshold level required for it to be criminal. That level is an objective one and does not depend upon the views of individual players. The type of the sport, the level at which it is played, the nature of the act, the degree of force used, the extent of the risk of injury, the state of mind of the defendant are all likely to be relevant in determining whether the defendant's actions go beyond the threshold.

11. Whether conduct reaches the required threshold to be criminal will therefore depend on all the circumstances. However, there will be cases that fall within a "grey area," and then the tribunal of fact will have to make its own determination as to which side of the line the case falls. The jury (or magistrates) would have to consider (among other questions) whether the contact was so obviously late and/or violent that it could not be regarded as an instinctive reaction, error or misjudgement in the heat of the game.

12. In the case of offences against the person contrary to Sections 18 and 20 of the 1861 Act, it is a requirement of the offence that the conduct itself should be unlawful.

To return to Luis Suarez.  Biting is not part and parcel of playing football and is a deliberate act.  Intentional infliction of injury enjoys no immunity.  The biting might amount to common assault or, if there is injury (however slight), to an offence under section 47 of the 1861 Act.  It is unlikely in this instance to amount to an offence under section 20 or 18 - (Grievous = really serious - bodily harm).

R v Barnes was a case involving a tackle (part and parcel of the game - an attempt to win the ball) and it was a game at an amateur level where standards of play might be expected to be less than in a top-level premiership game involving professional players.

It is reported that Ivanovic accepted an apology.  The matter will probably be left to whatever action is taken by Liverpool FC and / or the FA.   For a further view see Gibbs Barrister - Suarez biting the hand that feeds him.