Outspoken jurors ~ A most unhappy Bar as government presses changes 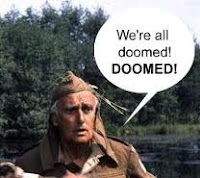 Another juror is in trouble for commenting on FACEBOOK.  As the excellent  David Banks Media Law blog  puts it:  He may be regretting being quite so frank in allegedly saying he “wanted to fuck up a paedophile.”  Another juror was discharged after stating that he felt incapable of trying a man fairly because the man supported an opposing football team.  As David Banks points out: ".... there is an ugly side to people’s nature and .... now they are committing it to the Internet.  And is this what we want? I think yes, I would rather know what a juror thought about me, so he could be discharged, than him keep it a secret and find me guilty."

A few weeks ago, this blog argued that there is a serious question of whether the independent criminal bar will survive a
series of government initiatives which may be summed up in the equation  QASA+(OCOF x BVT) = BOGOF where QASA = Quality Assurance Scheme for Advocates; OCOF = One case, one fee and BVT = Best Value Tendering.   The government is, of course, intent on pressing these initiatives to the full.   With regard to QASA in particular, the Bar claims that the scheme put forward is unnecessary since 'quality' is maintained through the already highly competitive nature of practice at the independent bar.  Meetings of the various Bar 'circuits' have been held and the vast majority of barristers appear to be opposing QASA.

The opposition may be about to develop into action.  It is reported that lawyers will miss court in opposition to QASA - The Guardian 19th April.  The Judiciary has issued a Judicial Statement - Northern Circuit :

"We have been made aware that members of the Bar and solicitors have said that they may not attend court on Monday.  We understand that the position of the CPS is that the CPS does not consent to any advocate instructed making any application to adjourn, or being absent from a listed case on Monday. The position of the judiciary is straightforward. It is constitutionally independent. It will hear any applications to adjourn, taking into account the interests of both parties and the administration of justice, but will only remove a case from the list if an application is made on properly arguable grounds. If no application is made or if it is refused, the court hearing will proceed on Monday as listed. In recognition of the uncertainty, the court will take steps to minimise any adverse impact on witnesses who have already been warned to attend on Monday."

The precise action being taken with regard to the last sentence (witnesses) is unclear.  An argument that a lawyer is not attending court because he is 'protesting' is unlikely in itself to justify the grant of an adjournment.  However, to force cases to proceed could be very damaging to individuals if they are unable to adequately question witnesses or put forward their defence.  If hearings are cancelled, there is the possibility that judges may either make wasted costs orders against counsel - (though a process has to be gone through to achieve that) - or, alternatively, judges may choose to put in a formal professional conduct complaint about the barristers in question.  Whether particular judges opt to pursue such lines may depend on whether the judge is or is not privately sympathetic to the 'cause.'

Not all voices are quite as strident. Nigel Pascoe QC (Leader of the Western Circuit) has blogged about the The right way to fight.  Pascoe begins:

"I want to bring together a raft of ideas to fight our fight within the law and avoid the twin perils of mass suspension (No to QASA) and wasted costs orders. Hopefully also Sun headlines on the lines of

Oh yes they would!"

Pascoe goes on to set out several very valid suggestions as to what the Bar might do to oppose QASA and BVT.  His arguments merit considerable attention.

The is going to be a difficult time for the Bar.  During these days of austerity, public sympathy is likely to be rather thin on the ground and the threat to the administration of justice is not properly explained to the public.  Remember how Kenneth Clarke QC / Jonathan Djanogly published the list of 'fat cats' who were earning huge sums on legal aid.  The reality is very different for the vast majority of barristers who have chosen to practice in criminal law.  Their remuneration can be exceptionally low.  Pay for a day's work can be well below the fee required to call out a plumber or electrician let alone the fees charged for non-NHS dental work; veterinary medicine; accountancy etc.

Are we all doomed as Private Frazer - (played by John Laurie) - claimed in Dad's Army?  Not if good sense on all sides prevails.

As ever, comments are welcome particularly from any practitioners who wish to offer their views.

CharonQC - Sunday 21st April - The finest justice system in the world: Not if ...

Days of austerity in which the rich are exceptionally rich.