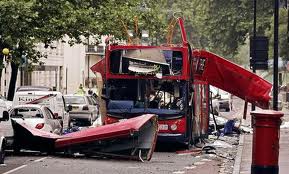 With Addendum of 15th May

The Rt. Hon. Lady Justice Hallett DBE - Acting Deputy Coroner for Inner West London - has delivered a verdict of unlawful killing in relation to 52 deaths caused by the detonation of bombs in London on 7th July 2005 - often referred to now as 7/7.  The learned Coroner's closing remarks are available on the Inquest website.  Lady Hallett has also issued a report under Rule 43 of the Coroner's Rules 1984 - as amended by the Coroners (Amendment) Rules 2008.  The Rule 43 report contains 9 key recommendations - summarised here.   Such a report may be issued where a Coroner is satisfied that the evidence gives rise to a concern that circumstances creating a risk of other deaths will occur or continue to exist in the future, and is of opinion that action should be taken to prevent the occurrence or continuation of such circumstances, the Coroner may report the circumstances to a person who the Coroner believes has power to take action.

The Inquest explored in detail the circumstances of each of the 52 deaths and looked at the adequacy of the emergency response.  It was common ground that the evidence did not justify the conclusion that any failings on the part of any organisation or individual caused or contributed to any of the deaths.  The Coroner took considerable account of expert knowledge as to the effect of bomb blast on individuals in close proximity to the detonation.  Lady Hallett was satisfied, applying a balance of probability test, that each would have died whatever time the emergency services had reached and rescued them.

Lady Hallett also ruled that there was no cause to resume the inquests into the deaths of the four bombers.   Their families had not made any representations that the inquests should be resumed.  Under the Coroners Act 1988 s 16(3) an inquest may be resumed only if, in the opinion of the Coroner, there is sufficient cause to do so.  A campaign group referred to as "July 7th Truth Campaign" was ruled not to be an "interested person" - Coroners Rules 1984 - Rule 20(2).

Note for students:  The Middleton case - ( as well as the subsequent Sacker case) - is an excellent and beneficial example of the impact of the Human Rights Act 1998 on domestic law.   For inquests, in which State responsibility was implicated,  it was necessary to read the Coroners Act 1988 in a manner compliant with the requirements of Article 2 (Right to Life).  Thus, the Coroner had to consider not just how the deceased came by his death but also in what circumstances the death occurred.

Addendum - 15th May 2011:  A number of articles written by staff at the Royal United Services Institute will be of interest to readers.  Jennifer Cole (RUSI Head of Emergency Management) - "7/7 Inquest: Be careful of demanding the impossible."   Cole looks at improvements which have been made since 2005 - (e.g. introduction of Hazardous Area Response Teams etc) - and makes the point that many of these changes have not been drawn to public attention.  She also expresses concern at the possible impact of financial cuts in the present climate.  Margaret Gilmore looked at the separate question of whether 7/7 was actually preventable.

The blog of Michael Meacher MP looks at whether MI5 misled the Parliamentary Intelligence and Security Committee.   Whether there should have been an inquiry into 7/7 is a serious question - see "7/7 and the public inquiry dilemma" - Channel 4 News 16th August 2007.

The government sought to have some of the inquest hearings heard privately.  This matter was addressed in the High Court - see "High Court upholds 7/7 secrecy ruling" - UK Human Rights blog 1st December 2010.  In November 2010, the Secretary of State for Justice informed Parliament that a Green Paper on the use of intelligence in judicial proceedings would be issued in the summer of 2011.
Posted by ObiterJ at Friday, May 06, 2011