Barbados - the change to parliamentary republic

"The time has come to fully leave our colonial past behind" - Governor General Sandra Mason reading speech prepared by the Prime Minister of Barbados.

The Caribbean island of Barbados is 21 miles long and 14 miles wide with a population of around 285,000.

On 30 November 2021 it will become a Republic and HM The Queen will therefore cease to be its Head of State. Former judge Sandra Mason is to be its first President. Economically, the island is very dependent on tourism.

Some of the reasons behind

the change to a Republic may be read in this article by Guy Hewitt, a former High Commissioner to the United Kingdom.

Long live Barbados as a republic, soon to be free of tarnished 'global Britain' | Guy Hewitt | The Guardian

Barbados became independent from the UK on 30 November 1966 but it remained a constitutional monarchy with HM The Queen as Head of State. The island remained within the Commonwealth.

The details of the constitution are therefore to be found in an Order in Council made at Buckingham Palace, London on 22 November 1966.

The Barbados Constitution issued in 1966 is an interesting document. In particular, it contains detailed provisions in Part III for the Protection of Fundamental Rights and Freedoms. These cover much the same ground as, for example, the European Convention on Human Rights but, in some respects go beyond that protected by the latter.

Section 48 of the 1966 Constitution conferred power on Parliament to make laws for the peace, order and good governance of Barbados.

Section 49 empowers Parliament to alter the Constitution by enacting an Act of Parliament. There is a proviso for a two-thirds majority in each House "at the final voting" for the alteration.

Provided that majority can be obtained then it is easy in legal terms for politicians to secure legislation to alter the Constitution. The 1966 Constitution made no provision for consultation with the people or for a referendum on changes.

Since 1966, a number of changes have been made to the Barbados constitution.

Barbados has remained as constitutional monarchy since 1966 so the road to becoming a Parliamentary Reppublic has been a long one which seems to have gained greater momentum since 2015. The process is informed by earlier reports - most notably the Forde Commission which reported on 15 December 1998 and recommended a parliamentary republic -

Legislation was enacted in 2005 to hold a referendum but no referendum was held.

The change to a parliamentary republic requires amendment of the constitution and that is being done by way of legislation enacted by the Barbados Parliament - (pictured above).

Amendment of a Constitution does not appear to some to be an entirely satisfactory way of proceeding. The method has met with opposition within Barbados and some would have preferred a complete new constitution to have been drawn up by Barbados itself. There is much to be said for that view if the island truly wishes to fully leave its colonial past behind. It may be that a constitution drawn up within Barbados might contain stronger amendment provisions than the present two-thirds majority in Parliament requirement.

As already noted, no referendum was held within Barbados on this significant change but it was not required as a matter of law.

The change is the result of a vote within the Barbados Parliament. A two-thirds majority was required in each House - (Senate and House of Assembly) - and, given the current political composition of the Houses, this was achievable.

Judicial Committee of the Privy Council:

Appeals from Barbados to the Judicial Committee of the Privy Council came to an end in 2005 when the Caribbean Court of Justice was inaugurated.

The change to parliamentary republic does not affect Commonwealth membership and the Commonwealth has other republics as members.

It may be that, spurred to action by Barbados, some other States will seek to remove HM The Queen as Head of State but I am not going to speculate further on this point. Time will tell.

Countdown To A Republic: From Colonialism to Independence and beyond - YouTube

The following are worth reading ...

Reflection: The Brutal Past of Barbados and the Grace of God – Christian's Chancery (home.blog)

Barbados defends inviting Prince of Wales to ceremony removing the Queen as head of state (msn.com) 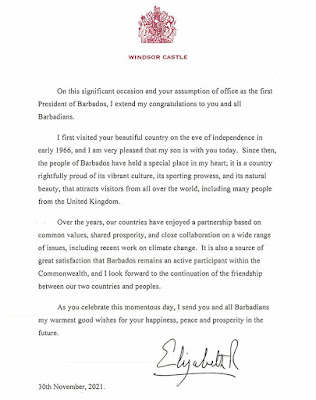