Addendum 19 October 2021 - the death of Dennis Hutchings was reported - BBC News.  The death was due to Covid. Mr Hutchings was standing trial (without jury) for attempted murder and causing grievous bodily harm. The alleged victim was John Pat Cunningham who was shot in 1974.
***
This post notes two significant developments relating to criminal justice and legal process in Northern Ireland.

An Order extending the possibility of non-jury trial in Northern Ireland to 31 July 2023 was approved. Non-jury trial is available in situations provided for in The Justice and Security (Northern Ireland) Act 2007 and the power to extend the 'effective period' is in section 9.

Legacy of Northern Ireland's past:

A statement was made in the House of Commons on 14 July by the Secretary of State for Northern Ireland (Brandon Lewis MP).

The statement is accompanied by a command paper (CP498) - Addressing the legacy of Northern Ireland's past - July 2021.

The command paper sets out a series of proposed measures for addressing the past. These are:

2] - establish an oral history initiative - to be delivered via new physical and online resources and through empowerment of museums in Northern Ireland. This would be supported by rigorous acdemic research projects.

3] - a statute of limitations to apply equally to all Troubles-related incidents, bringing an immediate end to criminal investigations and prosecutions

The idea of a statute of limitations, whatever the arguments in its favour, is highly controversial and appears not to be acceptable to the political parties within Northern Ireland.

Very few further details of the limitation proposal are revealed but it appears that it would be a blanket ban applying no matter how atrocious the consequences of the particular criminality and no matter who the possible perpetrators were. If the Police decided that an offence was "Troubles-related" then they would not be able to investigate the matter.

In addition to ending criminal investigations, the UK government is considering ending judicial activity in relation to Troubles-related conduct across the spectrum of criminal cases, current and future civil cases and also inquests. There was no explanation as to how that will square with the UK's obligations under Article 2 of the European Convention on Human Rights - The Guardian 15 July - UK plan for Troubles amnesty breaches international obligations - Irish Minister. 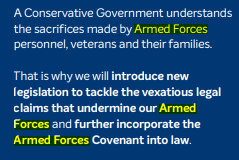 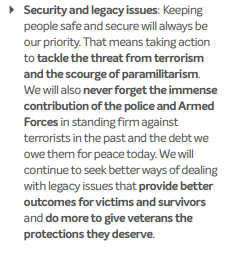 The government is engaging with the Irish Government and the Northern Ireland parties on these legacy issues.

Legislation will be required and it is the Secretary of State's hope that a bill will be presented to Parliament by the end of the autumn.

The Stormont House Agreement 2014 included provisions to investigate killings and other crimes associated with the Troubles.

See Victims - Dealing with the Past for information about the Independent Commission for Information Retrieval, Historical Investigations Unit, the Oral History Archive etc.