The lack of clarity over Brexit is deeply concerning for everyone.  Will there be a deal or will it be a no-deal Brexit?  If a no-deal Brexit then what will happen?  If no-deal, what will be the situation in Northern Ireland regarding the border?  What might happen in Parliament when it eventually emerges from its lengthy summer recess?

During his first week in  office, the Prime Minister travelled to Birmingham. Manchester, Edinburgh, Cardiff and Belfast.  He repeatedly stated that, whilst he actually wishes to have a deal, the UK will leave the EU on 31 October "no ifs, no buts" if an acceptable deal cannot be secured.  (In late June, Mr Johnson said that it was a "million to one" against no-deal - The Guardian June 2019).  The government has stepped up preparation for a no-deal Brexit which almost nobody actually voted for in the 2016 referendum.  "No-deal" was always a possibility due to the way that Article 50(3) is worded but it was not campaigned for and voting undoubtedly proceeded on the basis that a suitable deal would be negotiated.

The Chancellor of the Exchequer (Mr Sajid Javid) is reported as saying - "We want to get a good deal that abolishes the anti-democratic backstop. But if we can't get a good deal, we'll have to leave without one."

It is far from clear what is "anti-democratic" about the backstop which is built into the withdrawal agreement negotiated by Theresa May.  The "backstop" provisions are in a Protocol to the agreement - starting at page 302- see previous post - and the agreement cannot be ratified by the UK government unless it is approved by the House of Commons.

In September 2017, Theresa May appointed Mr Oliver Robbins as a Special Adviser on Brexit.  In that role he operated from the Cabinet Office and not as part of the Department for Exiting the EU.  It appears that Mr Robbins has been replaced by former diplomat Mr David Frost.

Mr Frost is commencing talks with EU counterparts. The Prime Minister has stated that the backstop should be taken out of the agreement.  It was, after all, principally (though not perhaps exclusively) the backstop which prevented the withdrawal agreement being accepted by the House of Commons.  However, the EU is on record as stating that the withdrawal agreement is not open for re-negotiation although talks on the political declaration are possible.

If Downing Street hopes to try to persuade the EU to reconsider aspects of the agreement then fresh proposals will be required but, so far, none have been announced.  In particular, fresh proposals will need to offer a workable alternative to the backstop which, so far, the EU has insisted upon so as to avoid a "hard border" across the island of Ireland.

It is also far from clear what will happen to that border in the event of a no-deal Brexit when, of course, the withdrawal agreement / political declaration will not apply.  In the no-deal Brexit scenario, the UK will leave the EU Customs Union and Single Market on Exit Day (31 October 2019 at 11pm).

In November 2018, the World Trade Organization (WTO) indicated that nothing in its rules would force either the EU or UK to erect a hard Irish border after Brexit. The Geneva-based trade body,  where countries negotiate the rules of international trade, would only intervene in a dispute over trade if one of its 164 member countries made a complaint. - Irish Times 25 November 2018

Nonetheless, whatever the UK government’s insistence that it will not impose any infrastructure, it has generally been assumed that no-deal will involve checks of some form.  The Irish government has pointed out repeatedly that Ireland cannot remain a part of the EU’s single market and allow the unmonitored flow of goods across what will then become a customs, standards and regulation border. While there is an understandable desire to avoid infrastructure on the frontier – which has so many crossing points it is virtually impossible to completely police anyway – some new system of checks would come into place - The Guardian 30 July.

A further issue is that avoidance of a hard border has been regarded as crucial for political reasons connected with the "peace process" under the Good Friday Agreement (GFA).  The Guardian 31 July reported that any future US-UK trade deal would almost certainly be blocked by the US Congress if Brexit affects the Irish border and jeopardises peace in Northern Ireland.  In the time of President Clinton, the USA helped broker the GFA.  The Preamble to the Agreement speaks of the two States - "Wishing to develop still further the unique relationship between their peoples and the close co-operation between their countries as friendly neighbours and as partners in the European Union."

Strand One of the GFA was also very concerned with "power-sharing" in Northern Ireland.  Unfortunately, power-sharing has not been in place at Stormont since early 2017 although efforts to re-establish it are underway.   Boris Johnson was recently warned that no-deal could require the return of direct government from London - Telegraph 26 July - and the BBC reports that Sinn Féin President Mary Lou McDonald has said that if there is a no-deal Brexit and hard border, the Prime Minister Boris Johnson must order an Irish border poll with a view to Irish reunification.  Provision for such a poll exists in the Northern Ireland Act 1998 section 1 / Schedule 1.

Too many unknowns: too many unanswered questions.  We now have a new "red line" in the Brexit process: the Irish backstop clause must be removed from the existing Brexit deal as a bare minimum. The EU have a long-standing red line that the backstop stays.  The two sides appear to be simply too far apart, and perhaps too stubborn, to arrive at a negotiated exit.

Following the Liberal Democrat win in the Brecon byelection held on 1 August, the Conservative government's overall majority is reduced to ONE. 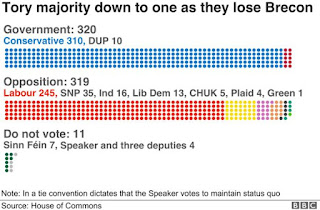 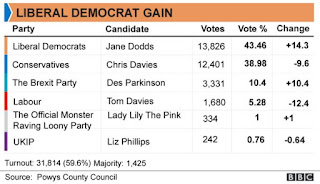