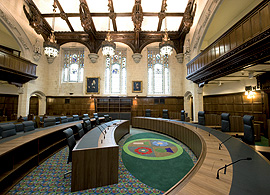 A Parliamentary Briefing Paper contains a considerable amount of information about such prosecutions.  A private prosecution is “a prosecution started by a private individual who is not acting on behalf of the police or any other prosecuting authority or body which conducts prosecutions”.  The right of a private individual to bring a criminal prosecution is a historical one originating in the earliest days of the legal system. Although the need for private individuals to bring (and pay for) criminal prosecutions has largely disappeared since the creation of the office of Director of Public Prosecutions (DPP) in 1879 the right to do so nevertheless remains.  It has been described as a “useful constitutional safeguard against capricious, corrupt or biased failure or refusal of those authorities to prosecute offenders": Gouriet v Union of Post Office Workers [1977] 3 All ER 70 per Lord Diplock.

In the Gouriet case, Lord Wilberforce referred to private prosecution as "a valuable constitutional safeguard against inertia or partiality on the part of authority."

There is no formal legal requirement for private prosecutions to satisfy the Code for Crown Prosecutors, which sets out the factors the Crown Prosecution Service (CPS) should consider when deciding whether to institute a public prosecution.  The right to bring and conduct a private prosecution is, however, subject to a number of restrictions. In some cases, a prosecution must be bought by a particular individual or body: for example, no proceedings for an offence under the Weights and Measures Act 1985 are to be instituted “except by or on behalf of a local weights and measures authority or the chief officer of police for a police area”.  In other cases, the DPP is under a statutory duty to take over the conduct of criminal proceedings: for example, those instituted on behalf of a police force or those relating to extradition.  The DPP also has a general discretion to take over the conduct of any other criminal proceedings at any stage, either for the purpose of continuing the proceedings or stopping them. There are also some cases in which the institution or carrying on of criminal proceedings is prohibited unless the consent of the Attorney General or the DPP is obtained.

A private prosecution is not a step to be taken lightly.  As a post on The [Justice] Gap blog points out, there is no legal aid for instituting private prosecutions and therefore the prosecutor will have to fund the case.  The defendant may get legal aid if eligible under the usual rules for legal aid provision in criminal cases.  Before commencing a private prosecution, the most important thing is the receipt of adequate professional legal advice

The Prosecution of Offences Act 1985 section 6:

Prosecutions instituted and conducted otherwise than by the Service.

(2) Where criminal proceedings are instituted in circumstances in which the Director is not under a duty to take over their conduct, he may nevertheless do so at any stage.

On 14th November, the Supreme Court is to hand down judgment in R (Gujra) v CPS - an appeal from the decision of the Queen's Bench Divisional Court - here.

Until 2009, the Director's policy in relation to the stopping of private prosecutions was based on an evidential test of "clearly no case to answer" as opposed to the Full Code Test of "realistic prospect of conviction" in the present policy: see R v Director of Public Prosecutions, ex p. Duckenfield [2000] 1 WLR 55 at para 63.

In the Divisional Court, Mr Gujra emphasised the constitutional importance of the right of private prosecution as preserved by s.6(1) of the 1985 Act and argued that the change from the former "clearly no case to answer" test to the "realistic prospect of conviction" test in the Code, amounted to an emasculation of s.6(1) and was therefore unlawful.  However, the Divisional Court decided that the CPS policy was lawful.  Richards LJ stated:

"Private prosecutions can continue, however, where the CPS assesses there to be a realistic prospect of conviction (and provided that the other elements of the policy, notably the public interest test, do not tell in favour of intervention, whether with a view to discontinuing the proceedings or with a view to their being carried on by the CPS). In practice, private prosecutions remain far from a dead letter."

By a majority (3 to 2), the Supreme Court has uphold the application of the full code test to private prosecutions.  The court referred to the test as the "reasonable prospect of conviction test."  The judgment  and a summary are available on the Supreme Court's website.  The majority comprised Lord Neuberger (President) and Lords Kerr and Wilson.  The minority comprised Lord Mance and Lady Hale.