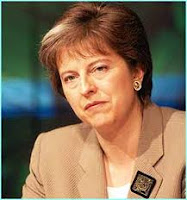 The Independent 10th June - Home Secretary Theresa May has "warned" judges that their powers to block the deportation of foreign criminals on human rights grounds may be curbed - if necessary by "primary legislation."  At this stage, Mrs May is seeking the backing of Parliament for new guidelines spelling out how the courts should apply the European Convention on Human Rights in such cases.  In particular, May is concerned about how the courts have applied Article 8 (Right to private and family life).

On this see Andrew Marr Show 10th June and the blogposts at UK Human Rights "Article 8 and a half" and at Tashalaw.

So, just what is going on here?

The right to private and family life (Art.8) is subject to any limitations which are "in accordance with the law and which are necessary in a democratic society in the interests of national security, public safety or the economic well-being of the country, for the prevention of disorder or crime, for the protection of health or morals, or for the protection of the rights and freedoms of others."

The government is actually putting foward amendments to Immigration Rules.   The background
to this may be seen in the Home Office Statement of Intent on Family Migration.  This document indicates that the new rules will "reflect fully the factors which can weigh for or against an Article 8 claim.  The Immigration Rules will for the first time reflect the views of the Government and Parliament as to how Article 8 should, as a matter of public policy, be qualified in the public interest in order to safeguard the economic well-being of the UK by controlling immigration and to protect the public from foreign criminals.

The government is inviting Parliament to "debate and approve the Government’s approach to Article 8 and the weight the new Immigration Rules attach to the public interest under Article 8(2), in order to provide the Courts with the clearest possible statement of public policy on these issues."  For immigration rules, it is an exceptional course to have such a debate in Parliament.

The Statement of Intent argues that the government's approach is consistent "with some non-binding comments made by the Courts in recent Article 8 case law and with the House of Lords’ observation in Huang in 2007 that immigration lacks a clear framework representing “the competing interests” of individual rights and the wider public interest in Article 8, because the immigration rules “are not the product of active debate in Parliament”.

The Courts will continue to determine individual cases according to the law but, in doing so, they will be reviewing decisions taken under Immigration Rules which properly reflect the qualified nature of Article 8 and the Government’s and Parliament’s view of how, as a matter of public policy, that qualification should operate in practice. If an applicant fails to meet the requirements of the new rules, it should only be in genuinely exceptional circumstances that refusing them leave and removing them from the UK would be a breach of Article 8.

Immigration rules have an interesting legal status and it is a relatively easy matter for government to amend the rules.  The matter was referred to by the House of Lords in Olelola v Home Secretary [2009] UKHL 25 where Lord Hoffmann said - at para.6:

"The status of the immigration rules is rather unusual. They are not subordinate legislation but detailed statements by a minister of the Crown as how the Crown proposes to exercises its executive power to control immigration."

Theresa May has raised the possibility of primary legislation if the courts use Article 8 in a way not reflected by the new rules.  The duty of the judges is to apply the LAW to the cases coming before them.  No more: no less.  Application of the law includes applying European Convention rights and, in doing so, taking account of the decisions of the European Court of Human Rights.  In the event that government dislikes the interpretations of the courts then it is open to Ministers to ask Parliament to legislate.  Parliament remains sovereign and this is recognised by the Human Rights Act 1998.