UK Nuclear Testing in the 1950s - the legacy 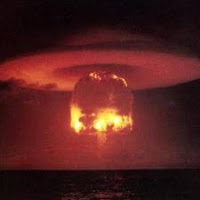 Nuclear testing in the 1950s - the legacy
On Thursday 28th July, the Supreme Court heard a "permission to appeal" argument in the British nuclear testing case.  The judgment to be appealed is that of the Court of Appeal Civil Division in Ministry of Defence v AB and others [2010] EWCA Civ 1317 - (Smith and Leveson LJJ and Sir Mark Waller).   In terse legalese, the issue to be appealed is whether the Court of Appeal - (1) applied the wrong legal test for knowledge in section 14 of the Limitation Act 1980, and (2) adopted the wrong legal approach to the exercise of discretion under section 33 of the Act.  The Supreme Court granted permission for the appeal - see BBC 28th July and The Independent 28th July.


From 1952 to 1958, the UK carried out atmospheric nuclear testing in the Pacific Ocean region.  Around 22,000 service personnel were involved.  In December 2004, actions were commenced against the UK government.  The total number of claimants is 1011 and they are mainly former servicemen but also some civilians.  Some of the claims are brought by executors / administrators or dependants.  The claims relate to consequences to health alleged to have resulted from
exposure to ionising radiation deriving from the tests.  Ten "lead cases" were selected by the parties to assist in determining the preliminary issues.

In early 2009, Foskett J gave a very detailed judgment - Ministry of Defence v AB and others [2009] EWHC 1225 QB - allowing the claims to proceed to trial though he expressed the view (para 876) that the claims might be settled via mediation.  He also stated that he did not wish to create a "false dawn" for the claimants should the cases get to full trial of the issues.  His judgment extends to 885 paragraphs, 2 Appendices and a very helpful index.  A good summary of Foskett J's decision may be read at "Atomic veterans given go ahead to sue government."

A significant question in the case is whether the claims are statute-barred by the Limitation Act 1980.  The basic position is that claims in tort (i.e. "civil wrong") are barred after 6 years but personal injury claims are barred after 3 years. The general aim of "limitation" is to prevent stale claims being raised many years after the event when they could properly have been raised promptly after the injury.  However, the legislation makes provision for cases where the injury may not be realised until after the expiration of the basic limitation period.   The Act also allows (section 33) the judge to disapply the limitation rules in some situations.  Even though Foskett J found that some of the claims were statute-barred, he nevertheless said that he would exercise his discretion (under section 33) to allow the claims to proceed.

An important report was produced in 2007 by Professor Al Rowland (formerly of Massey University, New Zealand) and is a significant contribution to the acquisition of knowledge relating to the effects of nuclear testing on humans within close range of the testing.  See Rowland report and the useful powerpoint summary.

In the world of the 1950s, the United Kingdom was anxious to become one of the world's nuclear powers.  From the late 1950s, this was not without political opposition - see, for example, CND and WMD Awareness.  In 1957, the Shadow Foreign Secretary (Aneurin Bevan) famously told the Labour Party Conference that unilateral disarmament would send a British Foreign Secretary naked into the conference chamber.  After Nagasaki and Hiroshima, it could hardly be argued that there was no knowledge of the effects of radiation on the human body.  Nevertheless, the longer term effects were probably not well understood.  Time has shown the health effects to be potentially very serious.  It is to be hoped that a way can be found to eventually conclude these cases in a satisfactory manner.

Note 30th July:  Law and Lawyers thanks UK Human Rights blog for reproducing this post on their blog.
Posted by ObiterJ at Thursday, July 28, 2011