are The Health Protection (Coronavirus, Restrictions) (Steps) (England) Regulations 2021 - SI 2021/364.  They comprise 94 pages of complicated and detailed legislation. The Regulations are made under powers granted to Ministers by the Public Health (Control of Disease) Act 1984 (as amended). They came into force on 29 March 2021 when the whole of England became subject to the STEP 1 Restrictions.

There has been trenchant criticism over how the Regulations continue to be made as well as their content. An interesting article is by barrister Adam Wagner at Prospect Magazine - Taking liberties: Covid-19 and the anatomy of a constitutional catastophe.

When are "gatherings" lawful? 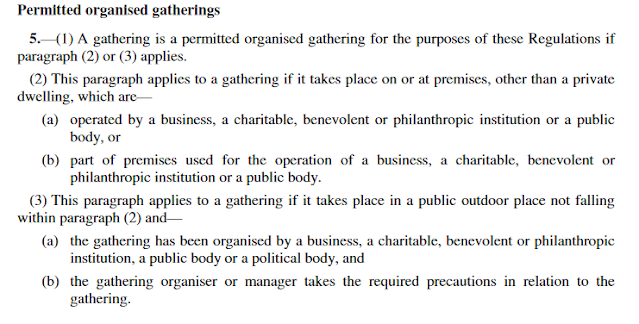 The Explanatory Memorandum published alongside the Regulations throws only minimal light on the interpretation of Regulation 5.  The phrase "charitable, benevolent or philanthropic institution" is defined in Regulation 2 as

This is a circular form of definition which is not particularly helpful but it seems doubtful whether a church service is a permitted organised gathering as defined by Regulation 5. It is therefore necessary to look further into what the Regulations subsequently say about gatherings for religious worship.

Within the Step 1 Area, indoor gatherings of two or more persons indoors are not permitted unless an exception applies.

Schedule 1 sets out exceptions and Exception 15 (Communal worship) is the most relevant.

The service at the Balham Church was communal worship and was obviously within a place of worship.

Exception 15 does not place any limit on the number who may attend communal worship. But there is the requirement for worshippers to be either alone or a member of a qualifying group.

A further requirement relates to "required precautions". That term is defined in Regulation 6. There has to be a Risk Assessment satisfying the requirements of Regulation 3 of the Management of Health and Safety at Work Regulations 1999. Further, the gathering organiser or manager must have taken "all reasonable measures to limit the risk of transmission of coronavirus, taking into account - (a) the risk assessment and (b) any guidance issued by the government which is relevant to the gathering.

Such guidance has been issued - HERE - and Regulation 6 is one example of where compliance with guidance is mandated by law.

The Police may direct that a gathering disperses and may direct individuals at a gathering to return to the place where they are living - see Regulation 10.  It is an offence, punishable by a fine, to fail without reasonable excuse to comply.

Under Regulation 12 an "authorised person" (includes the Police) may issue a fixed penalty notice (FPN) to any person that the authorised person reasonably believes - (a) has committed an offence under these Regulations, and (b) is aged 18 or over.

The requirement for reasonable belief brings an element of objectivity to the matter. It is not merely the opinion of the officer. On what objective basis did the officer come to his or her belief?  After all, reasonable belief is usually based on some degree of investigation to establish facts which give rise to the possibility of an offence.

The government has stated that, in its opinion, the Regulations are compliant with Convention rights.

Freedom to practice a religion is a fundamental right and, for many individuals, defines their identity as a believer and their conception of life.

For the Christian, Easter offers the hope of a resurrection and that death is not just the end. It matters not whether a reader agrees with that view. What does matter is that the view is a fundamental element in Christiantiy and is exemplified in matters such as the Apostle's Creed.

1. Everyone has the right to freedom of thought, conscience and religion; this right includes freedom to change his religion or belief and freedom, either alone or in community with others and in public or private, to manifest his religion or belief, in worship, teaching, practice and observance.

The European Court of Human Rights has published guidance on Article 9.

Limitations are permitted but must be prescribed by law. Also, the Article permits limitations on public health grounds but such limitations must be necessary in a democratic society.

The Police have asserted that they are "particularly concerned about the risk of transmission of the Covid-19 virus as a result of large indoor gatherings at which people are not socially distanced and some are not wearing masks. As such, officers made the decision that it was not safe for that particular religious service to continue.

The Metropolitan Police has claimed that - "Police officers have engaged with the public, explained the regulations in their first, second and third iterations, encouraged people to follow them and only enforced the legislation as an absolute last resort."

Concern about the transmission of the virus ought not to be the only consideration because the Regulations actually permit communal worship provided certain requirements are complied with. A human rights compliant approach to the matter would be to seek to enable the worship to take place with the requirements in place.

There is no report that the religious service in Balham was creating a public order problem so one wonders why the Police chose to act in this draconian way over this particular gathering.

Thanks to David Pocklington of Law and Religion for links to Catholic Bishops' Conference of England and Wales - Vade Mecum for Holy Week 2021 and, from the Vatican, Celebration of Holy Week 2021.