This post is an overview of Part Six (Institutional and Final Provisions) of the Draft Withdrawal Agreement.

The Withdrawal Agreement
includes the institutional arrangements to ensure the effective management, implementation and enforcement of the agreement, including appropriate dispute settlement mechanisms.

The EU and the UK have agreed on the direct effect and the supremacy of the entire Withdrawal Agreement under the same conditions as those applicable in Union law, as well as the fact that the Court of Justice of the European Union (CJEU) is the ultimate arbiter for matters related to EU law or Union law concepts. This is a necessary guarantee to make sure that Union law is applied in a consistent manner.

: Title I - General Interpretation and Application :

Part 2 of the draft agreement deals with the important topic of Citizens' Rights and an overview may be seen at European Commission: What is in the Withdrawal Agreement 14 November 2018.

Part Six begins by dealing with the role of the Court of Justice of the EU with regard to disputes arising under Part 2 Citizens' Rights.

If the transition period is not extended then it will end on 31 December 2020.  Hence, cases concerning citizens' rights which are commenced in the UK up to 31 December 2030 are caught by Article 158 and references could be made by the UK court to the CJEU.  (If the TP is extended then so will the application of Article 158).  This will ensure uniform interpretation of citizens' rights both in the UK and in the EU.  Nonetheless, this could well be a bone of contention for those who simply want the CJEU to have no jurisdiction in relation to the UK.

Article 159 creates an independent authority to monitor the implementation and application of Part 2 Citizens' Rights.  This Authority will have the powers of the EU Commission to conduct inquiries into alleged breaches of Part 2 by the UK and, if necessary, to bring proceedings before a court in the UK.  The existence of the authority can be ended but not before 8 years after the end of the TP. 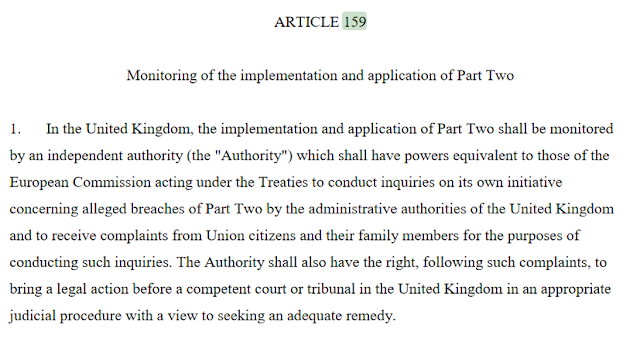 Article 160 enables the CJEU to determine certain references relating to the interpretation of Part V (Financial Provisions) of the agreement.  This is not considered further here.

162 grants the European Commission a right to submit written observations to courts in the UK and, with the court's permission, to make oral observations.  Article 162 is concerned with consistent interpretation and application of the withdrawal agreement.  Article 163 sets up a requirement for "regular dialogue" between the CJEU and the UK's "highest courts"

It is here that we find the creation what will be a very powerful Joint Committee. 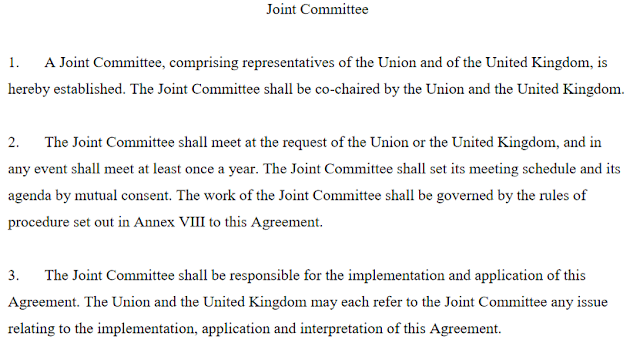 Article 165 creates a number of Specialised Committees - e.g. Citizens' Rights, Protocol on Ireland/Northern Ireland etc.  The committees will be required to work to the rules of procedure detailed in Annex VIII.


Article 166 is a particularly important power granted to the Joint Committee - a power to make decisions binding on the Union and the UK.  At least to my mind, it is remarkable that this power has not attracted concern among politicians at Westminster and elsewhere.  When a draft agreement appeared back in March it was noted in this post that - "The Joint Committee will clearly be very powerful given its power to bind the EU and the UK.  There appears to be no provision here for the involvement of the UK Parliament or, for that matter, the European Parliament.  Politicians would do well to pay particular attention to this." 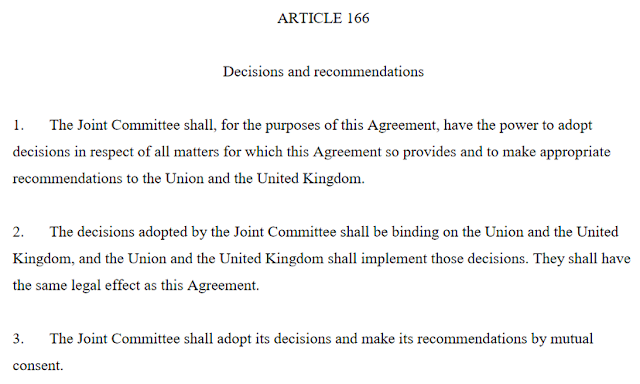 
Important parts of the Withdrawal Agreement are built on Union law, which is used to make sure that the withdrawal happens in an orderly manner. Therefore, it is all the more important that the same legal effects, methods and principles of interpretation as for Union law apply.

Finally, if compliance is still not restored, the Agreement allows parties to suspend proportionately the application of the Withdrawal Agreement itself, except for citizens' rights, or parts of other agreements between the Union and the UK. Such suspension is subject to review by the arbitration panel. 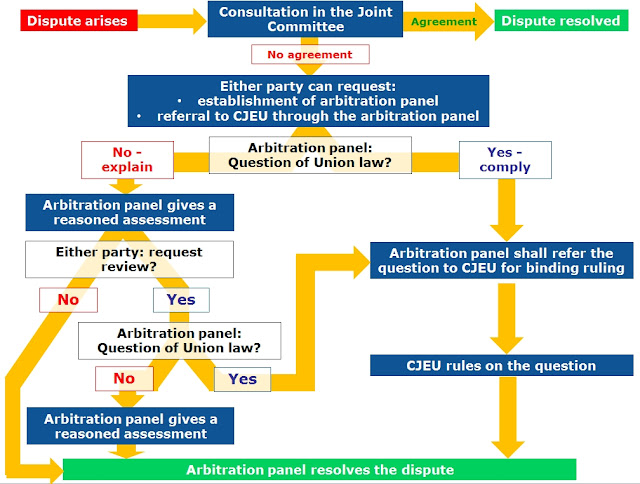 In the event that a dispute arises as to the meaning of Union law then Article 174 requires reference to the CJEU.

Arbitration panel decisions and rulings should be reached by consensus but a majority vote is possible.  NO dissenting views will be published.  See Article 180.

Under Article 181, members of arbitration panels shall be independent, serve in their individual capacities and may not take instructions - e.g. from the government.

There can be no doubt that the dispute settlement procedures in this draft agreement are a considerable improvement on those in the March 2018 draft.

The March draft WA, in its Article 162, instead proposed that where the Joint Committee failed to sort out a problem by agreement, that problem would be referred to the CJEU. In other words, this would make the CJEU the ultimate arbiter of all disputes between the UK and the EU about the commitments they had made to each other in the Withdrawal Agreement. This would have been unprecedented. The CJEU is not the ‘dispute settler’ in any other EU external agreement; eg, its trade agreement with Canada, CETA, does not say “and when we disagree, it goes to the CJEU” - see the article by Dr Sylvia Mars (Newcastle University) - The role of the CJEU in the (November) Withdrawal agreement; Thoughts

We should not anticipate that numerous disputes will arise and the majority of those that do will be resolved at the Joint Committee "consultation" stage.

For those really wishing to "dig in" to this topic there is also an article by Dr Tobias Lock on the Verfassungsblog 15 November - On Thin Ice: the role of the Court of Justice under the Withdrawal Agreement.

Articles 182 to 185.  Article 182 states that the Protocols on Ireland/Northern Ireland, the Sovereign Base Areas, and Gibraltar and also Annexes I to IX are an integral part of the agreement.  Article 183 deals with languages used for the text and provides that the Secretary General of the Council is the depositary of the agreement. 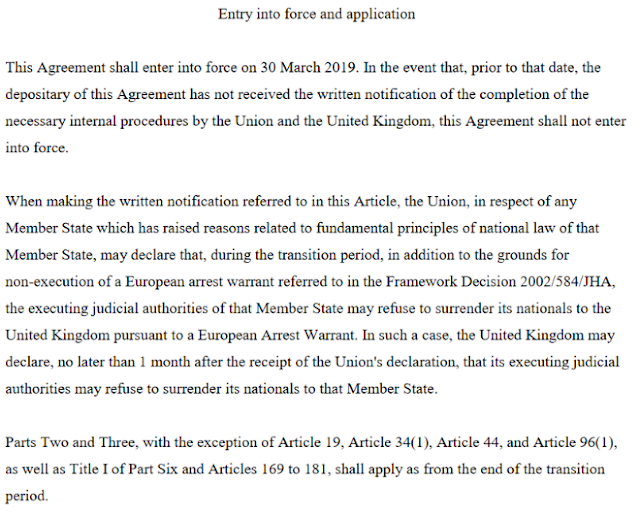 The Protocol relating to the Sovereign Base Areas in Cyprus, with the exception of Article 11 thereof, will apply as from the end of the transition period.

The Protocol on Gibraltar, with the exception of Article 1 thereof, will cease to apply at the end of the transition period.
Posted by ObiterJ at Saturday, November 17, 2018