The Prime Minister addressed the Confederation of British Industry  - her speech may be read HERE.  Mrs May said - "We now have an intense week of negotiations ahead of us in the run-up to the special European Council on Sunday.  During that time I expect us to hammer out the full and final details of the framework that will underpin our future relationship and I am confident that we can strike a deal at the council that I can take back to the House of Commons."

The EU General Affairs Council discussed the situation on 19 November - see HERE.  This communique notes - "On Sunday 25 November 2018, EU27 leaders are expected to endorse the Brexit withdrawal agreement and to approve the political declaration on future EU-UK relations."

The process in EU law for approval is set out in Article 50 .  The European Parliament must give its consent, acting by a simple majority.  Members of the European Parliament from the UK are entitled to vote. The Council will conclude the agreement, and may act by a qualified majority representing 72% of the 27 Member States, i.e. 20 Member States representing 65% of the EU27 population.

Whether the agreement and political declaration will pass the Council on 25 November is not certain.  Reportedly there are further concerns by France and Holland about access to fishing.  A further report - (see HERE) - is that the Spanish government is seeking "clarity" about the position of Gibraltar which, as things stand, is addressed in a Protocol to the draft agreement.   Article 184 of the draft sets out that there will be negotiations on the future relationship.  It appears that Spain wishes to have the Gibraltar question dealt with separately from the negotiations under Article 184.  Possible problems relating to Gibraltar were noted in this earlier post of  1st April 2017.

This post looks in outline only at the Draft Withdrawal Agreement Part Three (Separation Issues) and Five (Financial Provisions).

This Part is entitled "Separation Issues" and there are 13 Titles within the Part.  The full list is in the Table below.  The arrangements aim to provide legal certainty, although the future economic and security relationship between the UK and the EU could supersede the separation provisions agreed in many cases.  The arrangements in Part Three are without prejudice to negotiations on the future relationship.


The following is by way of an outline explanation of just three of the Titles.

Title I - Goods placed on the market.

The Withdrawal Agreement provides that goods lawfully placed on the market in the EU or the UK before the end of the transition period may continue to freely circulate in and between these two markets, until they reach their end-users, without any need for product modifications or re-labelling.

This means that goods that will still be in the distribution chain at the end of the transition period can reach their end-users in the EU or the UK without having to comply with any additional product requirements. Such goods may also be put into service (where provided in the applicable provisions of Union law), and will be subject to continued oversight by the market surveillance authorities of the Member States and the UK.

By way of exception, the movement of live animals and animal products between the Union market and the UK's market will, as from the end of the transition period, be subject to the applicable rules of the Parties on imports and sanitary controls at the border, regardless of whether they were placed on the market before the end of the transition period.   This is necessary in view of the high sanitary risks associated with such products, and the need for effective veterinary controls when these products, as well as live animals, enter the Union market or the UK market. 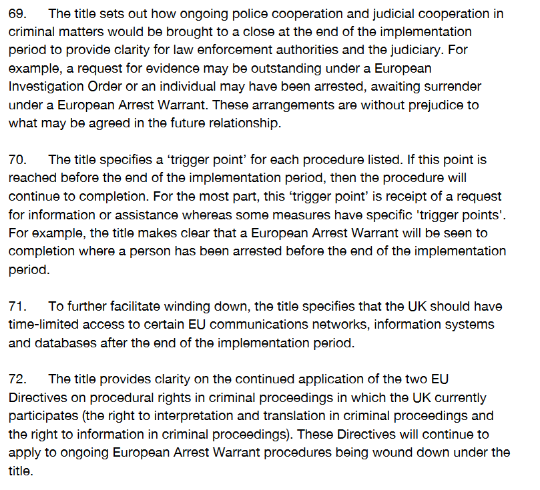 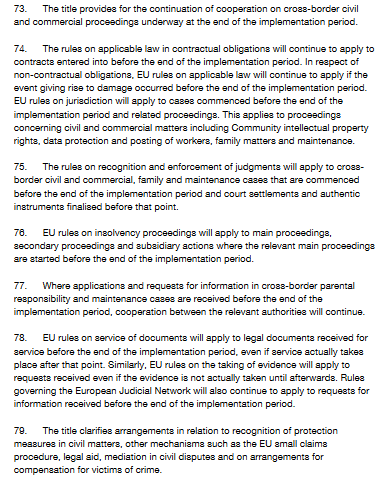 How much will the UK pay?

The objective of the negotiations was to settle all obligations that will exist on the date of the UK's withdrawal from the European Union. Therefore, the agreement is not about the amount of the UK's financial obligation, but about the methodology for calculating it.

Both sides agreed on an objective methodology which allows honouring all joint commitments vis-à-vis the Union budget (2014-2020), including outstanding commitments at the end of 2020 ("Reste à liquider") and liabilities which are not matched by assets.

The UK will also continue to guarantee the loans made by the Union before its withdrawal and will receive back its share of any unused guarantees and subsequent recoveries following the triggering of the guarantees for such loans.

In addition, the UK agreed to honour all outstanding commitments of the EU Trust Funds and the Facility for Refugees in Turkey. The UK will remain party to the European Development Fund and will continue to contribute to the payments necessary to honour all commitments related to the current 11th EDF as well as the previous Funds.

The UK's paid-in capital in the European Central Bank will be reimbursed to the Bank of England and the UK will cease to be a member of the ECB. In relation to the European Investment Bank, the UK paid-in capital will be reimbursed between 2019 and 2030 in annual instalments but will be replaced by a (additional) callable guarantee. The UK will maintain a guarantee of the stock of outstanding EIB's operations from the date of withdrawal until the end of their amortisation.
The UK will also maintain the EIB privileges and immunities (protocol 5 and 7 of the Treaty) for the stock of operations existing at the date of withdrawal.

What does this mean for EU projects & programmes?

All EU projects and programmes will be financed as foreseen under the current Multiannual Financial Framework (2014-2020). This provides certainty to all beneficiaries of EU programmes, including UK beneficiaries, who will continue to benefit from EU programmes until their closure, but not from financial instruments approved after withdrawal
.
How do you calculate the UK's share?

The UK will contribute to 2019 and 2020 budget and its share will be a percentage calculated as if it had remained a Member State. For the obligations post-2020 the share will be established as a ratio between the own resources provided by the UK in the period 2014-2020 and the own resources provided by all Member States (including the UK) in the same period. This means that the British rebate is included in the UK's share.

What is the UK's share in EU wealth (assets – buildings and cash)?

How long will the UK be paying for?

The UK will be paying until the last long-term liability has been paid. The UK will not be required to pay sooner than if it had remained a member of the EU. The possibility for both sides to agree to some simplification is foreseen.

Will the UK pay the pension liabilities of the EU civil service?

The UK will pay its share of the financing of pensions and other employee benefits accumulated by end-2020. This payment will be made when it falls due as it is the case for the remaining Member States.

What would be the financial implications of an extension of the transition period?

During any extension of the transition period, the UK will be treated as a third country for the purposes of the future Multiannual Financial Framework as of 2021. However, extending the transition period will require a financial contribution from the UK to the EU budget which will have to be decided by the Joint Committee established for the governance of the Withdrawal Agreement.

Further material pertinent to the financial settlement is at:

National Audit Office - Exiting the EU: the financial settlement - third report is dated April 2018 and is therefore likely to require an update in the light of the actual withdrawal agreement.  The report notes that in January 2018, the Chancellor of the Exchequer wrote to the Treasury Select Committee setting out a ‘reasonable central estimate’ of the settlement’s value of between £35 billion and £39 billion.

Institute for Government - What is the EU divorce bill? - This was published in March 2018 and will also require an update.