In the recent post on "Marital Coercion", it was commented that "the law of treason is ancient, obscure, complex and extremely rarely used."   In 1940, during the second reading of the Treachery Bill, the Home Secretary of the day (Sir John Anderson 1882-1958) described the Treason Acts as "antiquated, excessively cumbrous .... " (see Hansard 22nd May 1940).   This whole area of law is a disgrace to our criminal law and reform is long overdue.  In a 1977 working paper, the Law Commission recommended that all treason statutes should be repealed and replaced with an offence of helping an enemy with whom this country is at war and a peacetime offence of aiming to overthrow constitutional government by force.

The law of treason dates from the Treason Act 1351 (25 Edward III c.2)     (The Act appears to be declaratory: stating that which was already understood to be treason).  The Act was originally written in Norman-French though the link supplied here also shows a translation.  Treason is based on the loyalty ("allegiance") due from subjects to rulers.  Only those owing allegiance to the Crown my be liable.

Over the centuries, by judicial interpretation of the 1351 Act, the scope of treason was extended considerably.  In effect, new treasons came
to be laid down by judicial interpretation - sometimes referred to as "constructive treasons".  This was particularly the case with interpretation of the heads of treason to do with "compassing or imagining the Death of our Lord the King" or "waging war against our Lord the King in his Realm" or being "adherent to the King’s Enemies in his Realm, giving to them Aid and Comfort in the Realm, or elsewhere."

Kenny's Outlines of Criminal Law (14th edition, 1933) stated - "These interpretations were often violently artificial, almost setting the statute of Edward aside by their forced constructions."  Kenny went on to point out the evident dislike of 18th century juries to such constructions.  Examples cited by Kenny include (a) the case of Lord George Gordon who, for his share in riots of 1780 was indicted for 'levying war' and (b) the cases of Hardy, Horne Tooke and Thelwall who, in 1794, were indicted for a constructive 'compassing of the King's death."  (See 1794 Treason Trials and also the role played by the famous barrister Thomas Erskine).

The Treason Act 1795 was enacted and, in effect, reduced certain conduct from treason to felony.

Over the centuries, additional Treason laws were enacted but the majority of these have now been repealed.  For example, Sir Thomas More was charged with treason under the Treason Act 1534.  In 1981, Marcus Serjeant discharged 6 blank cartridges from a gun as the Queen rode past.  He was tried under the Treason Act 1842 s.2 and sentenced to 5 years imprisonment.  The 1842 Act was passed after a  number of incidents such as that in May 1842 when John Francis fired a shot at Queen Victoria - (here).

Historically, treason was a capital offence.  The method of execution varied but was often conducted in a hideous manner (Wikipedia) though, since the Forfeiture Act 1870, the method of execution used was hanging.  It has always been a mystery to me how some of the execution methods survived the Bill of Rights 1689 with its supposed prohibition on "cruel and unusual punishments."  Treason is no longer a capital offence since the death penalty no longer exists in the United Kingdom.  The UK has adopted Protocol 13 of the European Convention on Human Rights which requires the total abolition of the death penalty, even in time of war.  No derogation from this is permissible.  Thus, the maximum penalty for treason is life imprisonment: Crime and Disorder Act 1998 s.36.

Treason in the 20th century:

The 20th century saw a number of treason trials: Lynch 1903; De Jager v Attorney-General for Natal [1907] AC 326; Casement 1916 (and see Conor Gearty "The Casement Treason Trial in its legal context"); Joyce 1945; Amery 1945; Thomas Haller Cooper 1946 and Walter Purdy 1945.  Of these, Casement, Joyce and Amery died on the gallows.  De Jager (whose case arose in South Africa) was sentenced to imprisonment.  In the other cases, the death sentence was commuted to imprisonment.  The proceedings in Joyce did no credit to British justice.  Joyce was an American citizen but he was convicted on the technicality that he had once possessed (though never used) a British passport.  He was also executed in defiance of the principle that the death penalty should not have been exacted where there was a dissenting appellate judgment - (see Geoffrey Robertson QC - "Freedom, the Individual and the Law - 7th ed., 1993).

There can be little legal doubt that treason has been committed numerous times since World War 2 but the criminality has been dealt with by way of other serious offences.  It has not been necessary to trundle out the law of treason and, in some instances, to have done so would have only served to exacerbate an already bad political situation.

In the early days of World War 2, the Treachery Act 1940 was enacted and it covered much of the same ground as treason in relation to those lending assistance to the enemy.  The Home Secretary (Sir John Anderson) explained the reasons for the Act - Hansard 22nd May 1940.  One reason was to avoid a number of procedural features of treason trials.  An example of this was the so-called "Trial at Bar" where the defendant would face a number of judges and a special jury.  (Roger Casement's Trial was a Trial at Bar and see also the article here commenting that the trial was "one of the low points of English justice.")  Since the Treason Act 1945, a treason trial is conducted by the same process as a murder trial (i.e. trial on indictment before Judge and Jury) - see Criminal Law Act 1967 section 12(6).  The Treachery Act 1940 was finally repealed by the Criminal Law Act 1967.

Another antique must be mentioned - the Treason Felony Act 1848 .  See the cumbersome and lengthy text of section 3.  The Act appears to have been passed to enable prosecutions to be brought for certain conduct which might also have amounted to "constructive treasons."  The practical effect was to avoid the use of the death penalty in such cases.  (Transportation was substituted for the death penalty.  In turn, this has been replaced by imprisonment for life).

In R v Attorney-General ex parte Rusbridger [2003] UKHL 38 the editor of The Guardian sought a declaration as to whether he might be guilty under section 3 of the Treason Felony Act 1848 if the newspaper conducted a campaign advocating the peaceful and constitutional replacement of the monarchy by a republican form of government.  See the summary of the case at One Crown Office Row.   The House of Lords upheld the Attorney-General's argument that a claim for a declaration as to the meaning of section 3 should not be allowed to proceed.   However, Lord Steyn considered the general thrust of section 3 and concluded that to punish advocacy of republicanism would be contrary to Article 10 of the European Convention on Human Rights. Whatever had been the position before the 1998 Human Rights Act came into operation, it was difficult to think of any rational argument justifying the criminalisation of the conduct of citizens who wished to argue for a different form of government. Clearly, this part of the 1848 Act was part of a bygone age and did not fit into the fabric of our modern legal system. However, it was for the legislature, not the courts, to keep the statute book up to date.

Unfortunately, for whatever reasons, the legislature has failed to do that.

See the differing definitions of treason in the Criminal Code of Canada s.46;  Crime Act 1961 New Zealand; and Criminal Code Act 1995 (Australia).  In relation to Australia, the Sheller Committee rejected the proposition that the offence of treason was not appropriate in a modern democratic society - see here.

The report by the former Attorney-General Lord Goldsmith QC - "Citizenship: Our Common Bond" - contained some valuable discussion relating to treason and, in particular, the concept of "allegiance."  The report was critical of the law but concluded that "the offence of treason nevertheless ought to be retained in order to recognise the particularly grave nature of acts that are committed with the aim of overthrowing government or harming fellow members of society by those who, either as UK citizens or residents, owe a duty of loyalty to the UK. On the basis that there is a case for retention of the law of treason, albeit that it would be used sparingly, I recommend thorough reform and rationalisation of the law."

This is, of course, an entirely reasonable stance to take even if it is still resonant of a desire by the powerful to make particular examples of those found to be traitors.  However, is there any real need to retain an offence of treason at all.  The conduct referred to by Lord Goldsmith could, as the Law Commission suggested 35 years ago, be dealt with satisfactorily by new statutory offences - Law Commission Working Paper No. 72 - Treason, Sedition and Allied Offences (1977). 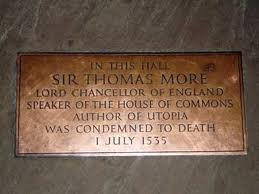