Draft Withdrawal Agreement - November 2018 - No.8 - Protocol on the Sovereign Base Areas in Cyprus 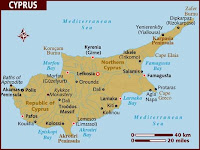 The United Kingdom operates two "sovereign bases" in Cyprus - Akrotiri and Dhekelia.   Earlier this year, a Parliamentary Select Committee noted - "The situation on Cyprus is further complicated by the existence of two Sovereign Base Areas (SBAs) on the island, remnants of its pre-1960 status as a UK Crown Colony. The Bases are British Overseas Territories administered by the Ministry of Defence, which are not part of the European Union.  Dhekelia — also known as the Eastern Sovereign Base Area or ESBA — straddles the Green Line and contains two crossing points for movements of goods and people between the two parts of Cyprus."

Whilst the bases
may be "remnants" of pre-1960 (independence) status, they continue to be of strategic importance as this article in New Internationalist 1 May 2017 makes clear.

Article 2 - Customs territory of the Union - The Sovereign Base Areas, taking into account the Treaty of Establishment, shall be part of the customs territory of the Union. For this purpose, the provisions of Union law on customs and the common commercial policy, including provisions of Union law providing for customs controls of specific goods or for specific purposes, shall apply to and in the Sovereign Base Areas.

Treaty of Establishment - i.e. establishing the Republic of Cyprus in 1960