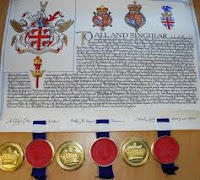 Two of the ways by which the Crown exercises its powers are the issue of Letters Patent and Royal Charters.

Letters Patent (Open Letters) are used in many areas.  In May 2012 the Ministry of Justice referred to 92 types of Letters Patent.  They are a type of legal instrument in the form of a published written order issued (technically by Her Majesty), granting an office, right, monopoly, title, or status to a person or corporation.   Certain appointments must be made by Letters Patent - e.g. the Judges of the Supreme Court (Constitutional Reform Act 2005 s.23).  Queen's Counsel are also appointed by this method.

The Guardian 11th February reports the case of Rohan Pershad, a barrister and Queen's Counsel (QC) who specialised in fraud cases.  Pershad has been convicted of cheating the public revenue in that he failed to pay over £620,000 in VAT.  See the HMRC Press Release. An interesting question is whether the Letters Patent issued to him may be revoked thereby removing his rank.  This appears
to be an uncertain area and is discussed on the UK Criminal Law blog where attention is drawn to the Marcus Einfield case in New South Wales.  In order to avoid a driving ban, Einfield lied on oath about who was driving his car.  The Governor of New South Wales revoked the letters patent appointing Mr Einfeld a QC on 26th November 2009.   (See also - Re Einfeld [2009] NSWCA 255 ).

Pershad could be disbarred and therefore cease to be a barrister - (the Bar Standards Board website details the process) - but the rank of QC appears to be a separate matter - a rank granted by the Crown.  It would certainly seem strange if that which may be given by the Crown may not also be removed.  There are examples of Letters Patent being revoked in some areas.  In 1983, Letters Patent constituting the Office of Governor General of New Zealand were issued and these revoked similar letters of 1917 and 1918. Pershad is to be sentenced on 26th February - (Guidelines via CPS)

The Leveson Inquiry recommended statutory underpinning of press regulation.  The key features of Leveson's scheme are outlined here.   As an alternative to Act of Parliament, Ministers have been considering using a Royal Charter - see the draft charter at Dept. for Culture, Media and Sport - Lord Justice Leveson report - regulatory system for the press.  The draft charter looks very much like a Bill (15 clauses and 4 Schedules) but it is a very different legal animal.  A Bill has to undergo all the legislation stages in both House of Parliament and then receive Royal Assent.  This is not the case with the making of a Royal Charter.

Royal Charters are made (technically by Her Majesty) on the advice of the Privy Council.   The use of charters dates back to Anglo-Saxon times and, typically, are used to grant special status to incorporated bodies.  There are in excess of 900 chartered bodies.  In 2012, the charters issued included the Chartered Institute of Legal Executives.  The oldest extant charters seem to be those creating the Universities of Cambridge (1231) and Oxford (1248).

The draft charter for press regulation creates a 'Recognition Body' which will have the powers set out in the charter to, for example, decide applications for recognition from regulators.  IF the government decides to adopt this route to press regulation then the charter will be drawn up by Ministers and presented to the Privy Council for approval.  The draft charter includes an amendment procedure (Clause 9) involving votes in Parliament though it also seems that the Privy Council could simply revoke the charter (with or without replacement) - (Clause 2).

This method of press regulation may leave rather too much power in the hands of the coterie of Ministers forming the Privy Council at any one time.   The Privy Council website (here) notes that a body, once incorporated by Royal Charter, will be subject to a significant degree of Government regulation of its affairs.

See The Independent 12th February - MPs hopeful of a halfway deal on press regulation - where some of the criticism of the charter method is set out.