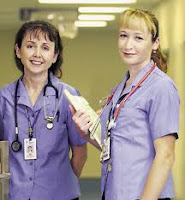 An article in the Daily Mail 3rd July made disturbing reading - "Rogue nurses who attack and steal from patients handed 'licence to abuse' as report reveals how few are actually struck off."   The author, John Naish, took a look at a number of issues relating to standards in healthcare in England and Wales.

The Council for Healthcare Regulatory Excellence (CHRE)  has published a strategic review of the Nursing and Midwifery Council (NMC).  It is a damning report - Strategic Review of the NMC - 3rd July 2012  and read the NMC response .

The CHRE was called in by Anne Milton MP, Parliamentary Under-Secretary of State for Public Health, in January to see why the NMC was failing to improve, particularly in its handling of cases about nurses’ and midwives’ fitness to practise. The report, published on 3 July, highlighted problems ‘at every level’.

The NMC’s long standing problems include confusion about its regulatory purpose, weak governance, poor planning, unreliable management information, and inadequate information technology. The NMC is currently recruiting a Chair and Chief Executive. The strategic review made 15 recommendations for changes in leadership, culture, finance and operational management.

The regulation of health professionals is a complicated
topic - (a parallel could be drawn with the regulation of legal professionals).  The Council for Healthcare Regulatory Excellence (CHRE) was created by the National Health Service Reform and Health Care Professions Act 2002 and oversees nine professional regulatory bodies set up to protect and promote the safety of the public.  (See regulatory role of the CHRE )

There has been considerable concern about the NMC's Fitness to Practice process and the outcomes.  In July 2011, the House of Commons Health Committee issued its 7th Report - Annual accountability hearing with the NMC.  The committee noted - "In the last three years there has been a 102% increase in referrals about nurses and midwives, and a 41% increase in the last year alone."  The reasons for this were not clear.

Evidence submitted to the committee - e.g.  A Dignified Revolution -  raised serious questions about failures to investigate and limited use of the power to strike off.

The NMC publishes Fitness to Practice statistics. In 2010-11, the published data shows that 198 nurses/midwives were struck off.  The 198 comprised 76 males and 122 females - (respectively, 0.1% and 0.02% of the total number registered).  It is possible for an individual who is struck off to apply to be restored to the register and there were 13 such applications and 8 were successful.

A further concern of the committee related to low standards of basic nursing care in acute hospitals and care homes, which appeared to be in breach of the code of conduct for nurses and midwives.

In the light of criticisms by the CHRE about "significant weaknesses" with the process, the Committee urged the Government to bring forward amendments as soon as possible to the Nursing and Midwifery Order 2001 so that the NMC could streamline its fitness to practise procedures.  Amendments came into force on 6th February 2012.