Can the law nail the Libor bankers? 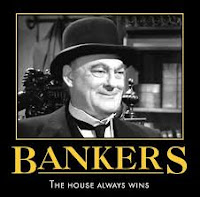 The Barclays Bank Libor / Euribor matter still has a long way to run.  The House of Commons voted (330 to 226) to hold a Parliamentary Inquiry which will take evidence on oath and be assisted by counsel.  Details such as the precise terms of reference remain to be settled.  The debate was marked by an unseemly row between an irate Ed Balls (Shadow Chancellor of the Exchequer) and George Osborne who appeared to smirk at Balls throughout - see City A.M. 6th July.  This partisanship does not auger well for the proposed inquiry and demonstrates why many, including myself, would have preferred a judicial inquiry even if it took rather longer.  Observers of the political scene may well wonder why phone hacking led to the judicial Leveson Inquiry whereas the manipulation of the inter-bank lending rate does not.

The Attorney General warned MPs that a speedy parliamentary investigation would potentially threaten to prejudice a criminal trial - “If there are criminal investigations or enquiries then it will be difficult.”  “Any inquiry by this House will have to be managed in light of that process because it mustn’t interfere with it.”

The Serious Fraud Office (SFO) Director (Mr David Green QC) made
a brief announcement that "the Libor matter" had been accepted for for investigation.  There are no details of who is under investigation or what the possible criminal offences might be.

One possibility - and I don't put it any higher than a possibility - is that the common law offence of conspiracy to defraud might be used.  This form of conspiracy was preserved by the Criminal Law Act 1977 section 5 though the Law Commission would have liked to see the back of it (Law Com 276, 2002).   In the context of Libor, it would require proof that two or more conspirators dishonestly intended to defraud another or others.

What other possibilities exist?

a) False accounting is an offence under the Theft Act 1968 section 17.

b) The Law Commission's 2002 report eventually led to the Fraud Act 2006 which entered into force on 15th January 2007 and does not apply to pre-commencement conduct.  (Pre-commencement conduct would have to be addressed, if possible, using prior offences such as obtaining a pecuniary advantage by deception).  The 2006 Act created a general offence of fraud (section 1) which may be committed in different ways as set out in section 2, 3 and 4.  Section 2 is fraud by false representation; section 3 is fraud by failing to disclose information and section 4 is fraud by abuse of position.  Where there is agreement between individuals to commit a Fraud Act offence then it would be possible to charge those individuals with a statutory conspiracy to commit that offence - see Criminal Law Act 1977 section 1.

After the Fraud Act 2006 came into force, the Attorney-General issued guidance on when the offence of conspiracy to defraud should be used.  The guidance is to the effect that the offence should only be charged exceptionally though a number of instances are given where the offence might be appropriate in the interests of justice (paras. 12-14).

c) There are a number of "behaviours" which could constitute "market abuse" under the Financial Services and Markets Act 2000 section 118.  However, these relate to "qualifying investments" admitted to trading on a "prescribed market."  These provisions are not, strictly speaking, criminal offences though financial penalties can be imposed on individuals found to be liable.  The Libor activities appear to me to be outside the scope of these provisions.

d) There are considerable powers under the Proceeds of Crime Act 2000 - see, for example, here and here. This is a complex and constantly evolving area of law.  By way of example,it would be possible, in principle, to take civil recovery proceedings under POCA 2000 Part 5 for the recovery of property (including money) which is or which represents property obtained by unlawful conduct.

All of this seems to present considerable difficulty and, of course, there may be other possibilities not considered above.  It will be interesting to see how this pans out.

The Chancellor of the Exchequer spoke in Parliament on 2nd July   and stated:

" .... people ask whether these gaping holes in the existing law mean that no action at all is possible.  After all, fraud is a crime in ordinary business; why shouldn’t it be so in banking?  I agree with that sentiment, and I welcome the Serious Fraud Office’s confirmation they are actively and urgently considering the evidence to see whether criminal charges can be brought - particularly in relation to the current Fraud Act and in relation to false accounting.  They expect to come to a conclusion by the end of this month.  We would encourage them to use every legal option available to them."

and, later in his speech:

"Mr Speaker, that brings me to the second question of the urgent changes we need to make to the regulation of LIBOR to prevent this ever happening again, and to ensure that in future authorities have the appropriate powers to prosecute those who engage in market abuse and manipulation.  I have today asked Martin Wheatley, the Chief Executive designate of the Financial Conduct Authority to review what reforms are required to the current framework for setting and governing LIBOR.  This will include looking at:

- whether participation in the setting of LIBOR should become a regulated activity;

- the feasibility of using of actual trade data to set the benchmark;  and

- the transparency of the processes surrounding the setting and governance of LIBOR.

The review will also look at the adequacy of the UK’s current civil and criminal sanctioning powers with respect to financial misconduct, and market abuse with regards to LIBOR.  And it will assess whether these considerations apply to other price-setting mechanisms in financial markets - to ensure that these kinds of abuses cannot occur elsewhere in our financial system.  We need to get on with this – not spend years on navel gazing when we know what has gone wrong.  I am pleased to tell the House that Mr Wheatley has agreed to report this summer so that the Financial Services Bill currently before Parliament or the future legislation on Banking Reform can be amended to give our regulators the powers they clearly need."

Note 10th July:  This post was kindly reproduced on Legal Week in their Legal Village section.
Posted by ObiterJ at Saturday, July 07, 2012