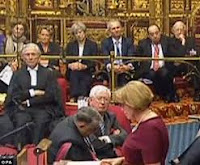 On Monday 20th February the House of Lords commenced a two day second reading of the European Union (Notification of Withdrawal) Bill.  Proceedings may be seen via Parliament's website.  One notable matter was that the Prime Minister attended the debate and sat on the steps to the Throne.  Has that ever happened before?  It has attracted considerable comment and some criticism.  It appears that Privy Councillors have this right and that Mrs May attended in that capacity.  One lives and learns the quirks of our rather ancient constitution - see here!  One of the others sat there is Rt. Hon David Lidington MP - Leader of the House of Commons and Leader of the Council.  I don't know who the others are.


The Bill passed its Second Reading.  Next is the Committee Stage on 27th February and it is there where any amendments to the Bill will be decided.