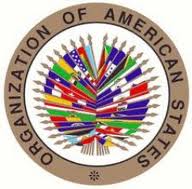 Update 3rd September:  Foreign Secretary William Hague' statement to Parliament.
---
Having met at Washington DC on 24th August 2012 to consider the situation between Ecuador and the United Kingdom, the Organisation of American States (OAS) Meeting of Foreign Ministers has issued a Press release and a Resolution was passed.  The key points in the Resolution are:

2. To reaffirm that those principles and standards constitute fundamental rules for ensuring the peaceful coexistence of all the countries that comprise the international community.


3. To reiterate the full validity of the principles enshrined in international law, such as respect for sovereignty, faithful compliance with international treaties, peaceful settlement of disputes, peaceful coexistence among states, and rejection of the threat or use of force to settle disputes.

4. To reject any attempt that might put at risk the inviolability of the premises of diplomatic missions, to reiterate the obligation / of all states not to invoke provisions of their domestic law to justify noncompliance with their international obligations, and, in this context, to express its solidarity and support for the Government of the Republic of Ecuador.

5 To urge the Governments of Ecuador and the United Kingdom of Great Britain and Northern Ireland to continue to engage in dialogue in order to settle their current differences in accordance with international law, taking into account the statements made recently by authorities of both governments.

6. To entrust the Permanent Council with the due follow-up of this matter.