R v Gordon Park ~ The "Lady in the Lake" murder

During the dry summer of 1976  Carol Ann Park, the wife of Gordon Park, went missing.

In August 1997, a body was discovered by divers in Lake Coniston.  Using dental records, the body was identified as Carol Park.  She had suffered a brutal death.  Her body was packaged carefully inside two bin-liners, a canvas bag and a large holdall and weighted down.

Gordon Park was arrested and charged with the murder.  He was remanded in custody but released when the charge was discontinued in January 1998 due to there being insufficient for a realistic prospect of conviction.


After further investigation, Park was arrested for the second time on 13 January 2004.  He was charged with the murder and in a 27 day trial held at the Crown Court in Manchester - (McCombe J and a jury) - he was convicted and sentenced to life imprisonment - BBC News 25 January 2005.  The trial judge ordered that he serve a minimum term of 15 years before parole could be considered.

The fuller story of the investigation may be viewed via Youtube albeit the video is primarily from a Police perspective - Lady in the Lake.  See also Ladies of the Lakes - Case 1.

Members of Mr Park’s family applied on his behalf to the Criminal Cases Review Commission (CCRC) which has now referred the case to the Court of Appeal (Criminal Division) - see the CCRC Statement.

The CCRC used its powers under the Criminal Appeals Act 1995 section 17(1) to obtain material from the Forensic Archive, seven individual police forces, the courts, the Crown Prosecution Service, prison authorities, the Probation Service, and a number of other government agencies and public bodies.

CCRC comments that it is referring the case because it considers there is a real possibility that the Court will quash the conviction in light of new evidence. In the Commission’s view that real possibility arises from the cumulative effect of a number of matters including: 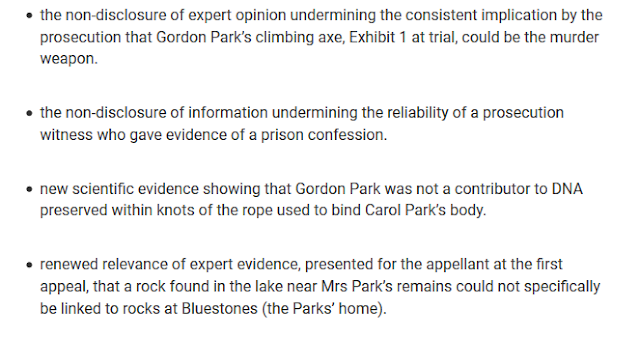 The Court of Appeal heard a reference from the Criminal Cases Review Commission - BBC News 6 November 2019.
Posted by ObiterJ at Saturday, October 27, 2018