After 29th March 2019, the aim is to have a "transition or implementation period" lasting until 31st December 2020.  The UK-EU arrangements following the transition period remain to be negotiated.  In a letter to the President of the European Council (Mr Donald Tusk) the Prime Minister refers to an "ambitious and close partnership."   In one sense, the "transition" is a transition to nothing!  There is NO provision in the Draft Agreement to extend the transition period beyond 2020.  The risk therefore remains that there may be no UK-EU agreement in place for post transition and the UK will be completely outside the EU, the Single Market and the Customs Union.

Whilst it cannot be said that the Draft Agreement has met with universal acclaim - (e.g. The Guardian 20th March) - the UK and the EU negotiating teams aim to finalise the entire Withdrawal Agreement by October.

Let's step back to the Joint Report of December 2017.  Paragraph 49 stated - "The United Kingdom remains committed to protecting North-South cooperation and to its guarantee of avoiding a hard border. Any future arrangements must be compatible with these overarching requirements. The United Kingdom's intention is to achieve these objectives through the overall EU-UK relationship. Should this not be possible, the United Kingdom will propose specific solutions to address the unique circumstances of the island of Ireland. In the absence of agreed solutions, the United Kingdom will maintain full alignment with those rules of the Internal Market and the Customs Union which, now or in the future, support North-South cooperation, the all-island economy and the protection of the 1998 Agreement."

Para 49 therefore contained 3 options.  The 3rd Option will now apply unless another solution is found during the negotiations.  In other words, in the absence of another solution for the Border, Northern Ireland would effectively remain within the EU customs union.

This comes only weeks after Theresa May emphatically rejected a proposal from the EU that would have set up a "common regulatory area" on the island of Ireland and, in effect, placed a UK-EU border down the Irish Sea.

The Draft Agreement contains text (Art 157) - in GREEN - requiring the creation of a JOINT COMMITTEE with responsibility for implementation and application of the Agreement and with power (Art 159) to adopt decisions which will be binding on the EU and UK.

As noted in this earlier post (2nd March) - "The Joint Committee will clearly be very powerful given its power to bind the EU and the UK.  There appears to be no provision here for the involvement of the UK Parliament or, for that matter, the European Parliament.  Politicians would do well to pay particular attention to this." However, the fact that this is now in GREEN means that it will in all probability be in the final Agreement - subject only to "technical legal revisions."

The UK will be able to negotiate and sign new trade deals to come into force in 2021.  This sounds good but, in reality, trade deals often take years to negotiate and why would any nation agree to a trade deal with the UK when the future relationship between the UK and the EU is unknown?  A sober fact is that EU membership gives the UK access to trade the world over since the EU has in excess of 700 trade deals already in place.  (The madness of Brexit)!

European Citizens of the 27 remaining EU Member States who arrive in the UK during the transition period will receive the same rights and guarantees as those who arrived before the day of Brexit."

Further links will be added below as they become available. 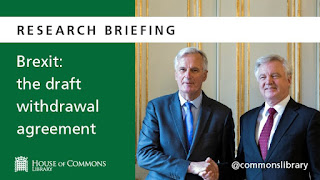