Brexit - take a break ~ what else is happening? 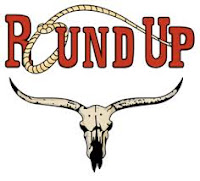 By way of a change, let's have a look at some things going on apart from the Brexit litigation.

I am beginning this post with a link to an excellent and reflective piece on the Jamie Foster blog - On Laughter and Forgetting - "So while the great and the good talk of cabbages and kings I remember those who have touched me with a fondness bordering on enthusiasm...."  For my part, I wish this blog well and hope it continues for a long time to come.

In many ways, family lawyers and social workers are among the unsung heroes of our time.  Their work rarely gets a mention unless something goes seriously wrong as it did in the Baby P situation back in 2007. The private law aspect of family law work has seen deep cuts to legal aid provision since the Legal Aid, Sentencing and Punishment of Offenders Act 2011 (LASPO).  Marilyn Stowe's first class blog takes a look at family law matters.
This week, the blog looks at the Terminally ill teenager who won the right to have her body cryogenically frozen.  Read the full High Court judgment here.   Then there is a splendid post by Amy Foweather on Transferring Family cases from one country to another where it is in the best interests of the child to do so.  This is a difficult area of the law and it is one that will require particular attention as the UK moves toward Brexit.  Yes, it's hard to avoid that subject!   John Bolch takes a look at the week in Family Law - see his post Access to Justice (or not), shorter hearings and more.


Parliament has continued to churn out new legislation - 24 Acts so far this year are listed on the Legislation website.  Not included in the list is the Investigatory Powers Bill dealing with "Mass Surveillance."   The Justice Gap takes a look at it.

The Justice Gap also looks at The Chilcot report and the politics of the Iraq War, the Killing of Baha Mousa and Plans for the UK to alter human rights law which may leave British soldiers without protection - "Reading the Ministry of Defence (MoD) press release I was struck by the spin and how, by not admitting that their plan also involved removing protections from soldiers, the briefing amounted to misinformation. Sadly the majority of the press took up the hook and reported the story in the way intended, thus providing another opportunity to beat up on the Human Rights Act and the lawyers who use it to hold the Government to account."

It was somewhat unusual that the immediate predecessor of the present Lord Chancellor chose to speak on legal matters recently.  But Mr Gove did just that.  Justice Gap reckons that Elizabeth Truss would do well to listen to him (read the blog).  "Giving the Longford lecture, Mr Gove called on the justice secretary to use her powers of executive clemency to direct the immediate release of up to 500 prisoners who have served more than the maximum term that would otherwise have applied to them."

The Longford Lecture was notable for Mr Gove's views about advocacy: " ... individual for individual, barristers provide a better service ....."  Unsurprisingly, that has not gone down too well - Solicitors Journal 17th November.

There was a Parliamentary announcement about the Chagos Islanders -Announcement- This is a very long-running story which has involved litigation before the House of Lords and the Supreme Court of the UK.  The airbase is to remain until (at least 2036).  See Chagos Support.  There is now talk of a move to get the matter before the International Court of Justice - The Guardian 17th November.

The Archbishop of Canterbury has said that he may be an extremist under the government's guidelines -The Christian Institute.  See the Prevent Strategy and Prevent Duty guidance.

The Guardian has drawn attention to new guidelines on the questioning of vulnerable witnesses.


Finally, is Northern Ireland about to see the end of the Diplock Courts - (post 14th October 2010)?  Read this: 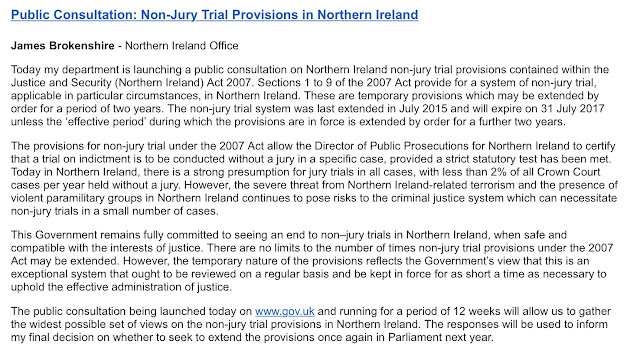