A jewel beyond price

The judges are now "Enemies of the People" according to a headline in the Daily Mail 4th November 2016.  This is because the High Court decided that Parliament must authorise the giving of notice that the UK has decided to leave the EU.  The headline disgusts me.

It does not matter whether one thinks that Parliament should be involved in this absolutely vital decision or whether it is in order for Ministers to give the required notice under "Royal Prerogative" powers without seeking any authority from Parliament.  Legal opinion on that differs.  The point is that British judges are independent and are charged, under their judicial oath, to carry out their duties "according to law" and "without fear or favour."  The judges were asked to decide a point of constitutional law and they discharged their duty in the full knowledge that the decision would be unpopular in some quarters and that it would attract severe criticism from a number of notable politicians and others who ought to know better.

An independent and fearless judiciary is a jewel beyond price.  It is our duty as citizens of the United Kingdom to stand up for that principle.

The Lord Chancellor has a statutory duty to defend the independence of the judges.  The present holder of this ancient office has failed to carry out that duty.

"The Lord Chancellor, other Ministers of the Crown and all with responsibility for matters relating to the judiciary or otherwise to the administration of justice must uphold the continued independence of the judiciary."  Constitutional Reform Act 2005 section3

The Lord Chancellor's oath is:

“I,     , do swear that in the office of Lord High Chancellor of Great Britain I will respect the rule of law, defend the independence of the judiciary and discharge my duty to ensure the provision of resources for the efficient and effective support of the courts for which I am responsible.     So help me God."

The Guardian published the views of former Lord Chancellor, Lord Falconer,  which defends the independent judiciary - The vicious assault on UK judges by the Brexit press is a threat to democracy

Some 36 hours after the media headlines, a statement appeared.  It is utterly inadequate as a defence of judicial independence. 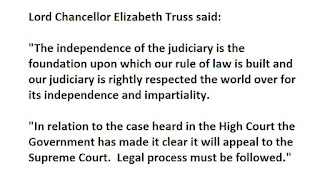