The "On the Run" administrative scheme ~ Statement in Parliament 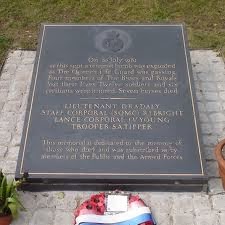 
In the Parliamentary session of 2005-6, a Northern Ireland (Offences) Bill was introduced into Parliament.   The Bill was introduced on 9 November 2005, and it had its second reading in the Commons on 23 November and passed its committee stage. Further information on the provisions is given in Library Research Paper 05/78.   Following widespread opposition to the Bill, Peter Hain MP announced on 11 January 2006 that he had decided to withdraw the bill.  He noted (HC Debates 11th January 2006 c286-288):

'Every Northern Ireland party vigorously opposed the Bill, bar Sinn Fein. Now Sinn Fein opposes it, because it refuses to accept that the legislation should apply to members of the security forces charged with terrorism-related offences.  To exclude
from the provisions of the Bill any members of the security forces who might have been involved in such offences would have been not only illogical but indefensible, and we would not do it.  Closure on the past cannot be one-sided.  That was, and is, non-negotiable.   The process would have made people accountable for their past actions through the special tribunal before being released on licence.  Sinn Fein has now said that any republican potentially covered by the legislation should have nothing to do with it.  But if no one went through the process, victims who would have suffered the pain of having to come to terms with the legislation would have done so for nothing. That is unacceptable, and I am therefore withdrawing the Bill.'

Following the decision by Mr Justice Sweeney to stay the indictment against John Downey (previous post), the Secretary of State for Northern Ireland (Theresa Villiers MP) made a statement to Parliament - Statement of 25th February 2014.  The statement refers to the administrative scheme for dealing with those known as "On the Runs".  The scheme was in operation from around September 2000.  "It was devised by the previous government.  The details were not fully set out to Parliament, though the scheme was referred to in July 2002 in answer to a parliamentary question given by the then Secretary of State for Northern Ireland, John Reid. [My emphasis].

Thus, on the basis of an administrative scheme not fully set out to Parliament, the authorities issued letters to those on the run.  In her statement, Villiers stressed that those given letters were also advised that "should new information or evidence of wrongdoing come to light at any point in the future, then they would be subjected to normal criminal proceedings. There was, therefore, no immunity from possible future arrest."

The letter to John Downey, contained the error that he was not wanted by any Police Force in the UK.  In fact, he was wanted by the Metropolitan Police.  However, despite this error, Mr Justice Sweeney decided that it would be an abuse of process to allow the indictment to stand.  The announcement that there would be no prosecution appeal against this decision seems surprising and ought to be more fully explained to the public.  It is surely the very least that the public and the families of the victims deserve.  A statement by the Attorney-General to Parliament (26th February) merely asserts:

'The court has now heard full argument and has considered a great deal of documentation. The judgment given is a detailed and careful assessment of the case and the circumstances in which Mr Downey received his letter. The CPS and I do not consider it gives rise to any prospect of successful appeal, and I am therefore of the view that the matter cannot be pursued further.'

In the Attorney-General's statement he stated that he gave his consent to the explosives prosecution which was one of the charges against Downey.

Telegraph 26th February - Victims of IRA bomb cheated out of justice by a monumental blunder - this article states that the Crown has said that there will be no appeal against the decision of Sweeney J.  " ... announcing that the Crown would not appeal, prosecutor Brian Altman QC acknowledged the pain of the victims’ families “who must live with the consequences of it daily, and with the memories of that dreadful event”.