The Anti-social Behaviour, Crime and Policing Bill was introduced to the House of Commons on 9th May 2013. The Bill is sponsored by the Home Office and the text of the Bill, as at the date of this post, is HERE. There are 153 clauses and 8 schedules.  The Bill will affect a large number of areas of the law and will grant considerable additional powers to the police and to other bodies such as local authorities.

It is also worth noting that, whilst the Human Rights Act 1998 (HRA) is in force, there is at least the long-stop of human rights to act as a brake on some of these extensive powers since public authorities are required to act compatibly with convention rights (section 6).  We would enter a very uncertain and worrying time if the HRA were to be repealed and judicial review of official decisions and actions was curtailed (as government is now seeking to do).  Perhaps that is precisely why some Ministers (including the present Home Secretary) seek withdrawal from the European Convention and repeal of the HRA.

Part 1 - Injunctions to prevent nuisance and annoyance - a wide power here for the court to grant an injunction applicable to any person aged 10 or over who engages in or threatens to engage in conduct capable of causing nuisance or annoyance to any person.  There are certain conditions which must apply.  Note: a Youth Court will have power to make such orders.

Part 2 - Criminal behaviour orders - these may be made upon a prosecution application but the person must have been convicted of an offence first.

Part 12 - Criminal Justice and Court fees - clarifies the law on compensation for miscarriage of justice (Cl 143); trial by jury for low value shoplifting (Cl 144); amends the Serious Organised Crime and Police Act 2005 in relation to persons at risk; amends the law on surcharges; court and tribunal fees.

Part 13 - General including a power for Ministers to make 'minor and consequential' amendments to the Act itself.  (Such powers only create additional complexity to the law and add costs to legal work).

There is much in every part of this Bill requiring detailed examination and I shall return to this.  One striking feature of modern legislative activity is that the law grows ever more complex as more and more layers of power over the citizen are granted to the police and others (e.g. local authorities).  As each layer is granted the seeds are sown for further layers to be needed in the future.  Powers granted never seem to be quite enough for the authorities and they come back and ask for more! 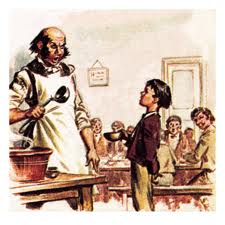 Oliver Twist asks Bumble for more.  Bumble had the power to grant or refuse.